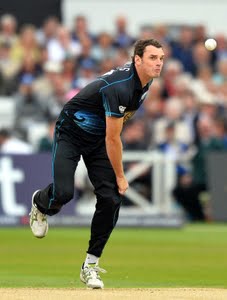 Pitch report :The match will be the first international in Dambulla in three years after the venue's dim lights ruled it out for day/night encounters. However, its return to the fold may be spoiled by bad weather, which is forecast to stay for much of the game's scheduled duration. If a match can be played, recent List A results suggest scores in excess of 280 are par at the ground.

In one of his most open public statements since taking over the captaincy in February, Angelo Mathews has admitted to the strategic mistakes that cleared New Zealand's path to an unexpected series lead in Hambantota. Not taking the weather into consideration during the wettest months of the year is a rookie mistake made by a rookie captain, and Sri Lanka will now rethink their plans, and their side ahead of the final match. The forecast for the match in Dambulla does not look pretty, and if any result is reached, it is almost certain to be arrived at via Duckworth-Lewis.
A young New Zealand team will meanwhile be riding high on the thrilling, last-ball win. In a series in which both sides fielded relatively inexperienced men in the batting order, it is the visitors who have shown the stronger signs of regeneration, primarily through Tom Latham's sumptuous 86 from 68 that provided the substance for a successful chase.
One of the key differences between the teams is that younger batsmen like Latham and Colin Munro have the chance to bat higher up the order and build innings in the absence of three New Zealand regulars. Sri Lanka play each of their three seniors in the top four, but even Dimuth Karunaratne, who is batting in his preferred opening position, is yet to make a telling contribution. As part of his post-match break down, Mathews challenged Sri Lanka's youngsters to make good on the promise, and in the third match, no one will feel that pressure more than Karunaratne.
In a strange series, neither team has quite found the wherewithal to exert long periods of pressure with the ball, either. Kumar Sangakkara and Tillakaratne Dilshan have made two breezy century stands in as many matches, while Sri Lanka spoiled Nuwan Kulasekara's good start against New Zealand in the second ODI with a poor patch in the middle of the innings. How each attack responds to the challenge of bowling with a wet ball - which will likely be the case in Dambulla - may play a defining role in the match.
This is not a series that New Zealand were intent on winning, as evidenced by two high-profile withdrawals, but a 2-0 result may also cultivate considerable confidence ahead of their home summer.
Ball by ball updates
Full Scorecard
Last Five Match Result :