At the end of day four, a draw was the most likely result at Perth. Only a sporting declaration could have made things interesting. That never happened. Furthermore, a rain interruption took away the slimmest of chances, if any, New Zealand had of chasing down an improbable target in super quick time.

At the end of day four, a draw was the most likely result at Perth. Only a sporting declaration could have made things interesting. That never happened. Furthermore, a rain interruption took away the slimmest of chances, if any, New Zealand had of chasing down an improbable target in super quick time. The day began with a much more significant development as Aussie speedster Mitchell Johnson, who had been contemplating retirement, announced that the final day at Perth would be his last in international cricket. There was no fairy tale finish, but Mitch signed off with impressive batting and bowling efforts. 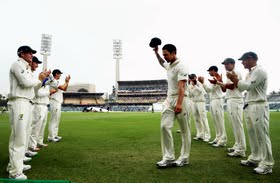 Steven Smith's late declaration killed all hopes of a result. He asked New Zealand to get 321 in 48 overs. All that was left now was for the crowds to see what kind of impact Johnson could make in his final appearance at the bowling crease. And, he signed off in style, bowling typically fast and claiming the struggling Kiwi openers with short balls. Johnson first dug one in to Tom Latham, who went for the hook, but only managed to top-edge the ball to fine leg. Johnson was soon to send back Martin Guptill as well. The lanky opener fended off a bouncer, and the ball lobbed off his gloves to short leg.

The two wickets would take Johnson to 313 Test scalps, making him the third most successful left-arm pacer in Test history, behind only Wasim Akram and Chaminda Vaas. While Johnson bowled with skill, it was more of a token farewell act as he finished with 2 for 20 from his six overs. Any hopes Australia had off triggering a New Zealand batting collapse were quickly shunted away as first-innings centurions Kane Williamson and Ross Taylor carried on their good form. Taylor was unbeaten on 36 and Williamson on 32 as the Kiwis drew the match without much trouble. They were 104 for 2 in 28 overs when play was called off.

Earlier in the day, Smith did not go in for a brave declaration, neither did their batsmen play as if they were desperate for quick runs. This even as wickets kept falling at regular intervals. Australia added just 73 runs in the first session and another 54 in the second. This was far from the recipe for an impending declaration. Trent Boult delivered the first blow when he got Smith to edge one behind the wickets on 138. Mitchell Marsh was the next to go trapped lbw by Doug Bollinger for 1. Tim Southee then got the other centurion as Adam Voges was given lbw for 119, his review not being upheld.

Voges' dismissal brought Johnson to the batting crease for one final time. He played a typically aggressive knock, after being given a guard of honour, hitting five fours in his 29 from 45 balls. He was eventually dismissed, edging behind the wickets as he tried to pull Southee. Australia batted on as Peter Nevill chipped in with 35. He was the last man to be dismissed, also edging behind to Southee. Australia declared at 7 for 385, with Mitchell Starc on 28 and Josh Hazlewood on 2. A result was out of the window by now, but Johnson gave a nice glimpse of his heyday prior to his exit.