Problem Plagued Australia To Have Torrid Time In England

Were they able to, the Australians would probably have delayed the start of what will be back-to-back ashes contests until a more opportune time. With all the troubles swirling around them, the men from Down Under are simply not in the best position to mount a serious challenge to an England team near the top of their test game -- especially in home conditions.

Were they able to, the Australians would probably have delayed the start of what will be back-to-back ashes contests until a more opportune time. With all the troubles swirling around them, the men from Down Under are simply not in the best position to mount a serious challenge to an England team near the top of their test game -- especially in home conditions. In recent years only the mighty South Africans, with one of the best bowling units in years, have managed to lord it over them on their own battlefield.

Beset by problems on all sides, it is unlikely that Michael Clarke and his men will be fit, focused and sharp when they turn up at Nottingham on July 10th. “Homework gate,” the firing of coach Mickey Arthur, an unbecoming twitter rant and a bar brawl involving David Warner, the troublesome back of captain Michael Clarke and a myriad of selection problems, means they will begin on the back foot for such a monumental challenge. 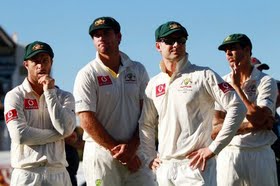 Even if they were at their best the task would have been difficult. As things now stand, Australia’s mission can be likened to a band of stragglers setting out to capture a well-guarded palace surrounded by a crocodile infested mote.

How Australia’s batting contends with the highly skilled England bowling attack should be the main determining factor of this much awaited encounter. The visitors’ batting line-up has lacked steel following the departure of Ricky Ponting and Michael Hussey. Michael Clarke is the lone batting great among them and has been carrying much of the load. He will need the rest of the batting to make contributions in a way that they didn’t in the recent series against India: in eight tries, only once did they go past 400 and fell below 250 five times with Clarke being the heaviest scorer despite missing the last test.

Having said that, it is unlikely the Australian batting will be as easily cast aside as they were in their last test outing. But if they hope to press the hosts they will need to consistently put up high scores against a side containing quite a number of voracious batsmen.

The tourists will arrive at Trent Bridge with a freshly minted opening pair. New coach Darren Lehman has already indicated that David Warner, though available for selection after his bar-fight suspension, and Ed Cowan, having failed to make the opening positions their own, will forfeit them to Shane Watson and Chris Rogers.

Scorer of 60 first class hundreds and averaging over 50 in a career stretching back to 1998, the 35-year-old left-hander might have been unlucky to have only a single test to his name. His experience in English conditions, playing for a number of counties, would have counted in his favour, yet the fact they have turned to him at this stage indicates concern for the frailty of the batting in general and the Cowan/Warner union in particular.

Shane Watson’s bowling makes him a vital member of the side, but having counted only two centuries in 41 tests he needs to now show his true mettle with the bat in order to help the tourists withstand the new ball onslaught from James Anderson and company, and to improve his standing within the team. He has his work cut out, especially if there is much swing on offer.

Apart from Clarke, Australia’s middle order is unlikely to cause the England attack many sleepless nights. Not that they will be walkovers; there is enough talent among Ed Cowan and David Warner (If they find a place in the middle), Usman Khawaja, Steve Smith, Phillip Hughes and Brad Haddin to provide some runs, but it is likely that England’s formidable attack will be able to limit the damage they can do.

Australia’s best chance of gaining the upper hand over their hosts lies in their pace bowling. High quality fast men like James Pattinson, Ryan Harris, Peter Siddle and Mitchell Starc have the ability to impose quite a bit of difficulty on their opponents. Pattinson showed what he could do even on lifeless subcontinent surfaces on the recent Indian tour; Peter Siddle can be quick and unrelenting; and if Mitchell Starc finds conditions to his liking he can really be a disruptive force, taking wickets in bundles.

But the Aussie pacers will find that English top order wickets don’t come cheap. Captain Alastair Cook and Jonathan Trott are two of the most adhesive batsmen in world cricket, and the reinstatement of the gifted Kevin Pietersen means that the hosts also have a batsman that can snatch the game away in a flash. It could therefore be a long summer for the Australian attack, especially since they might find themselves deficient in the spin bowling department. Nathan Lyon is a hard trier but the English batsmen will be confident they can deal with whatever he throws at them, and they may even be more concerned that exiled Pakistani leg spinner will probably become available during the series.

Still, cricket is a game of uncertainty – nothing is guaranteed. An unheralded player or two could possibly come out of nowhere and spur the underdogs to a spectacular and unlikely victory. Bradman did it for Australia in 1930; Tyson did it for England in 1954. The 1989 Australians were called the worst ever to visit England, yet players like Steve Waugh, Mark Taylor and Terry alderman administered a sound beating on their stunned hosts. England are heavy favourites because, as far as we know, they start with a much better team than the Australians. It will take a brave man to wager against them retaining the Ashes.