Former India coach Madan Lal has firmly backed Anil Kumble after the latter resigned as coach of the Indian team on Tuesday.

Former India coach Madan Lal has firmly backed Anil Kumble after the latter resigned as coach of the Indian team on Tuesday. He went to the extent of blaming Virat Kohli's ego for the problem.

Giving an interview to cricketnext, Lal said, “These boys want ‘yes men’ around them. The likes of Bangar suit the bill for them as they are happy getting their egos boosted.” 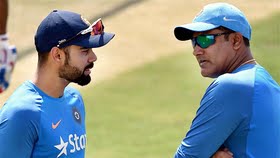 “Anybody who stands in their way and shows them the mirror or questions them back must go. This has always been the trend and happened even when I was coach. I had a 45 per cent win record, but even then, I had to leave. The reason was that I was passionate about just winning and wasn’t an expert when it came to man- management. Coaching the Indian team is as much about managing the egos as it is about getting results,” Lal added.

He also felt that foreign coaches last longer as they are happy playing second fiddle. “The sole reason why the foreign coaches succeeded was because they were happy to stay in the background and not question the authority of the senior players. Be it John Wright, Gary Kirsten or Duncan Fletcher.”

“They were all successful and had long stints because they didn’t want to pose questions or challenge the big boys. The moment one of them did question, we saw what happened to him. There is immense pressure when you are coaching such strong personalities and it is nevereasy,” he said.

On the Kohli-Kumble rift, Lal opined, “This is the trend in Indian cricket. The players are the bosses. It has happened over the years and continues to happen. The captain decides everything and it isn’t like Australian or English cricket wherein the players and coaches are on the same pedestal and there is no ‘superstar’ culture. In India, if you have rubbed the captain the wrong way, you are as good as finished. While it is still not clearly known why and how the Kohli-Kumble relation went downhill, Kumble deserved better treatment.”