Pakistan and South Africa, two of the most disappointing teams in the World Cup so far, will come face to face in match number 30 of World Cup 2019

While Pakistan was completely outdone by India in their previous match, South Africa faced another heartbreak against New Zealand, who have made it a habit of giving the Proteas some really tough moments. It will be really hard for South Africa to recover from Kane Williamson's stinging last-over six.

The loss in the last game has all but knocked South Africa out of the World Cup while a defeat for Pakistan in the next game would put the former champions in a similar position. After beating England, they have lost their way rather badly. While they were halfway there against Australia, eventually losing by 41 runs, India was all over them in their 89-run defeat. 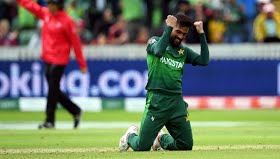 Pakistan's seniors have let them down rather badly. Mohammad Hafeez started well in the game against England but has since not made much of an impact. Shoaib Malik has been the biggest disappointment of all, and his constant failures could mean the end of his career. There is a chance Haris Sohail might replace him for Sunday's clash. Mohammad Amir has been the only consistent force in the team so far.

South Africa's chances of progressing to the last four hang by a slender thread. They have failed primarily because their batting hasn't been up to the mark. Hashim Amla got a fifty in the last game but fell soon after. He seems well past his prime. The others in Quinton de Kock, skipper Faf du Plessis, and Aiden Markram have also been big disappointments.

South Africa's bowling too hasn't lived up to its standards. The loss of Dale Steyn is proving to be a big one and, apart from Kagiso Rabada and Imran Tahir, the others just seem to be making up the numbers. Chris Morris did stand out in the last match with his passionate spells. However, Andile Phehlukwayo is proving to be a handicap to the team as of now.