Cook and co. take England into a massive lead at Eden Gardens

England are in the driver’s seat in the Third Test by ending the crucial third day’s play with a massive first innings lead of 193 runs. There is still some batting left for England to ensure that they will not have too many runs to chase down on a wearing pitch possibly on the final day.

England are in the driver’s seat in the Third Test by ending the crucial third day’s play with a massive first innings lead of 193 runs. There is still some batting left for England to ensure that they will not have too many runs to chase down on a wearing pitch possibly on the final day. For the record, the tourists ended the third day’s play at 509 for 6 in 163 overs with Matt Prior on 40* (from 46 balls with 6 fours and a six) along with Graeme Swann (21* from 45 balls).

The final session saw some action with India taking three wickets but it was all too late and the bowlers are just too fatigued. There was some energy though early in the post Tea session when Ishant Sharma had Ian Bell (5) under edging a cut shot to the keeper because of the low bounce. Some overs later, Kevin Pietersen who stroked his way to 54 (from 85 balls with 9 fours and a six) got out lbw to Ashwin after missing a paddle sweep having lunged a long way across his stumps. 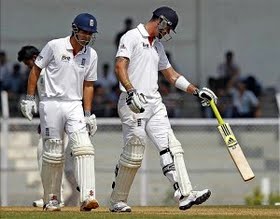 Samit Patel was next to be dismissed but not before moving to a breezy 33 (from 47 balls with 5 fours). Pragyan Ojha was the lucky wicket taker as it was a rank long hop outside off but kicked up to take a top edge which was caught in the second attempt by Sehwag at slip. By the close of play, India had to see another English partnership get the better of them. It has been two long days for the Indian bowlers, especially for Ojha and Ashwin who have both bowled 50 plus overs!

Tea on Day 3: Alastair Cook’s marathon innings finally came to an end at the Eden Gardens. It came through a bizarre fashion with Cook taking evasive action to a direct throw from Virat Kohli fired at the bowling end. Cook missed out in a double century by 10 runs. The England Captain could have got away had he first made it to the crease and then jumped up while taking evasive action but it was the other way around. Cook’s 190 came in 377 balls with 23 fours and 2 sixes.

India had also taken the wicket of Jonathan Trott (87 from 223 balls with 10 fours) in the post lunch session when the right hander was forced to edge his forward defence to a turning delivery from Pragyan Ojha to Dhoni. Trott had added 173 runs for the 2nd wicket with his Captain. By Tea, England have collected a lead of 65 runs with a total of 381 for 3 in 135 overs. Kevin Pietersen is batting on 29* alongside Ian Bell who is new at the crease.

Lunch on Day 3: England are closing in towards India’s first innings total of 316 following a solid batting show in the morning session. The visitors haven’t lost a single wicket while adding 80 runs in the 32 overs bowled by the Indians. There was just one opportunity when Alastair Cook patted back a return catch off a short ball which had stopped onto him but the bowler Ishant Sharma was caught napping.

By Lunch, England have marched to 296 for 1 in 105 overs with Cook closing in towards a double century. The English Captain is on 167* (from 323 balls with 22 fours and a six). Jonathan Trott has played some classy drives to move onto 66* (from 172 balls with 8 fours) to stretch the 2nd wicket stand to 131 runs. India did manage to slow down the runs though with Ashwin in particular improving his bowling performance.

Build Up to Day 3: Professional performance from England for two straight days has given them near control over India in the Third Test at Kolkata. While India has been facing problems with its new look middle order, the bowling attack is also causing severe headaches. None of their bowlers have shown any signs of taking wickets in a hurry to potentially call themselves as match winners. England batted for 73 overs yesterday and lost just the one wicket that too because of a high risk sweep shot.

The visitors resume Day 2 with another 100 runs to knock out before they get into the lead to set their eyes on a Series lead of 2-1.