India rolled over a miserable West Indies for 100 in merely 26.5 overs on Sunday to clinch the opening Test in Antigua by an impressive margin of 318. After Ajinkya Rahane notched up his first Test century in two years, and Hanuma Vihari narrowly missed out on one, Jasprit Bumrah ran through West Indies to finish with exceptional figures of 5 for 7.

Resuming the day looking to build a sizeable lead, India lost captain Virat Kohli early. However, Rahane and Vihari featured in a big hundred plus stand to put India in command. India declared on 343 for 7 after which Bumrah, with support from Ishant Sharma and Mohammad Shami, did the rest. 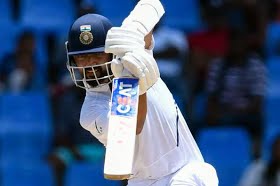 Rahane was adjudged man of the match for his 102 and 81 in the Test, the latter lifting India from a precarious 25 for 3. Speaking at the post-match presentation, the Mumbai batsman agreed that the ton felt special as it came after just a long gap.

“Getting this hundred after 29 or 30 innings feels special. The stand between Rahul and me was crucial and bowlers delivered well after that, but this hundred was special in the second innings,” Rahane admitted.

He also stated that the stint with Hampshire has aided him in preparing for the West Indies challenge. “My time with Hampshire really helped me. I dedicate this hundred to the people who backed me and supported me when I was going through a rough patch. I've been getting 70s but getting a 100 means a lot to me," the Indian vice-captain further said.

On the contrast in the batting conditions in the two innings, Rahane explained that things were really tough on the first day. “I think first day the wicket was damp and West Indies bowled really well in that session. But it was important to play as many balls as possible without thinking about runs.

“We wanted to bowl 90-100 overs in the first innings knowing runs would come. In the 2nd innings, me and Virat wanted to get a good partnership. We wanted to just bat, bat and bat," Rahane added.

Apart from Rahane, Bumrah also excelled with a special spell of bowling, which blew away the Windies. Speaking about his performance, Bumrah was quoted as saying in a Cricket Next report, "I am feeling very good. As a bowling unit, we came with attacking options. Me and Ishant were trying to use the breeze too, to generate the swing."

“A lot of work goes into my delivery. I used to bowl the inswinger earlier, but the more Test matches I've played, I've gotten more confident to bowl the outswinger, especially since the England series.

“I am always trying to evolve," he explained, on the secret of his continued success.