A well paced knock from Skipper Brendon McCullum eased Otago Volts to a 2-wicket win with 13 balls to spare over Faisalabad Wolves at Mohali. McCullum, who came in at no.3 after the fall of the first wicket in the second ball itself...

A well paced knock from Skipper Brendon McCullum eased Otago Volts to a 2-wicket win with 13 balls to spare over Faisalabad Wolves at Mohali. McCullum, who came in at no.3 after the fall of the first wicket in the second ball itself, remained unbeaten on 83 from 65 balls. McCullum was slightly slow to his high standards, taking 49 balls for his 50 but after that picked up the ante to wrap up things smoothly for Otago.

Faisalabad Wolves promised to be aggressive with the ball early on when left-arm swing bowler had opener Neil Broom caught at slip in the first over. However, the bowling attack just fizzled out and Saeed Ajmal was carefully negotiated by McCullum and co. While McCullum was slow at the beginning, the Otago Volts got their initial momentum from left-handed Hamish Rutherford, who smacked an impressive 25 from 12 balls which included three sixes. Rutherford got out miscuing a pull off Ajmal in the 6th over. 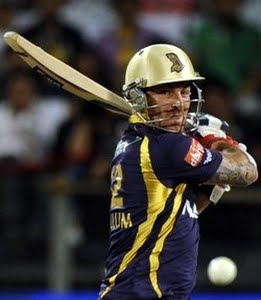 McCullum wasn’t alone in taking his team past the target with Wicket Keeper Derek de Boorder batting well at the other end for an unbeaten 30 from 28 balls. Boorder along with McCullum sealed the match with their solid 101-run partnership for the unbroken third wicket stand. Brendon McCullum was the Man of the Match for his 83*.

Faisalabad Innings Update: Otago Volts bowled and fielded really well to restrict the Faisalabad Wolves to 139 or 8 on a green pitch that has some life for the seam bowlers. The start itself was a poor one for Faisalabad with fast bowler James McMillan strangling them with his extra zip off the surface. From 34 for 3 in the 8th over, Faisalabad finally got going thanks to Skipper Misbah-ul-Haq.

Otago’s spinners in particular Nathan McCullum bowled poorly to let Misbah take Faisalabad out of the woods. Misbah got bowled for 46 (from 34 balls with 4 fours and 3 sixes) to an Ian Butler yorker with three overs left. Faisalabad had a decent finish getting 31 in the last three overs. For Otago, the three pacers McMillan, Butler and Neesham took two wickets each.

Toss and Teams: Faisalabad Wolves, the team from Pakistan has won the toss and elected to bat first in the 1st Qualifier Match against Otago Volts from New Zealand at the PCA Stadium in Mohali.