India begin the tri-series as favourites

The euphoria of the Champions Trophy victory has hardly settled down, and India are already preparing for their next challenge – the tri series in West Indies, with the third team being familiar opponents Sri Lanka.

The euphoria of the Champions Trophy victory has hardly settled down, and India are already preparing for their next challenge – the tri series in West Indies, with the third team being familiar opponents Sri Lanka. Considering the fact that the Indians have been dominant over both the hosts and Asian counterparts in the recent times, they would undoubtedly be the favourites going into the tournament. The one factor that can stand in their way of victory is their own boredom and sense of overconfidence, if the same creeps in. Considering that so much cricket is being played these days, it can sometimes get difficult for the players to continuously motivate themselves.

Meanwhile, the tri-series will give Shikhar Dhawan another chance to enhance his reputation. His opening partner Rohit Sharma has had a good record against the West Indies, and would like to improve on his numbers. He cannot just keep getting starts and getting out because at times when Dhawan fails, India will fall back on him to rise to the challenge. Virat Kohli is also in form, so the Windies and Lankan bowlers, in particular, will bewary of him. 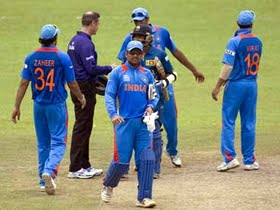 Among the other batsmen, Dinesh Karthik had a brilliant warm up for the Champions Trophy, but did not quite deliver in the main matches except for a half-century. Of course, he did not have to do much since Dhawan was in such sizzling form. Still, if Karthik wants to ensure his place in the eleven is safe, he must come up with some substantial knocks. Suresh Raina and MS Dhoni hardly got a chance to bat in the Champions Trophy. It wouldn’t be incorrect then to say that they may be a bit rusty. Mind you, they are experienced pros, but time out in the middle is paramount for all batsmen.

Like Dhawan, Ravindra Jadeja would also be keen to carry on his wonderful performances. While he has been exceptional with the ball over the last six months, he has also contributed with the ball on crucial occasions. It would be too early to term him an all-rounder, but there are impressive signs nonetheless. Add of that his tigerish fielding, and he becomes acomplete limited-overs package. India need Jadeja to continue in the same vein, for his performance has been central to the team’s success in recent months. Remember, he was the man of the match in the Champions Trophy final.

In the bowling department, there will be high hopes from the consistent Bhuvneshwar Kumar again. On the other hand, Ishant Sharma may have played a major role in India’s triumph in the Champions Trophy final, but his performance still leaves a lot to be desired. Umesh Yadav as well has blown hot and cold, and his economy rate is particularly worrying. Meanwhile, with Irfan Pathan out of the reckoning due to injury, Shami Ahmed will get another chance to prove himself. As for the spin department, Ravichandran Ashwin will be expected to be the leader of the pack.

These are the same men who won the Champions Trophy. Can they conquer the Caribbean challenge as well?