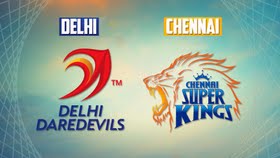 Recent Matches results
Chennai Super Kings: LW L W W
Delhi Daredevils: L L W L W
Pitch report:
By a opinion of a cricket specialists a Chennai wicket will substantially be support for a batting predominantly and a few support for bowlers on a floor.
Preview:Brendon McCullum has the habit of setting the tone as an opener. Last year, he was the third-highest run-getter for Super Kings with 405 runs. Those came at a strike rate of 121.62. But if his World Cup form - 328 runs at a scorching rate of 188.50 - is an indicator, McCullum could be one of the most dangerous batsman for Super Kings in the first half of the tournament. The same can't be said about Daredevils' opener. Quinton de Kock had a brilliant start to his international career but had a poor World Cup, managing 145 runs in eight outings. There were others in the South Africa batting line-up to cover for his lack of form, but in the Daredevils set-up, he will have to lead the way
After finishing at the bottom of the points table for two consecutive seasons, Daredevils went on a head-turning shopping binge at the IPL auction. Record cash was splashed on one man in the hope that it would rejuvenate a side devoid of an icon. It will be, therefore, a huge challenge for the team, as well as for Yuvraj Singh, to make a statement in their first outing, specially with the absence of Angelo Mathews, who won't be available to play as the match is in Chennai. A win would be perfect but even a good fight would ease Daredevils' fans and management.
Match Stats:
Delhi Daredevils managed five wins in 30 matches over the last two seasons, a massive dip in fortunes after finishing at top of the table in the 2012 edition
Zaheer Khan hasn't played competitive cricket for almost a year - Mumbai Indians' match against Kings XI on May 3, 2014 was his last outing
Teams :Chennai Super Kings team: MEK Hussey, MS Dhoni, BB McCullum, SK Raina, RA Jadeja, DR Smith, R Ashwin, M Manhas, A Nehra, S Badree, Rahul Sharma, I Pandey, Faf du Plessis, Pawan Negi, Baba Aparajith,Kyle Abbott, Ronit More, MM Sharma, Matt Henry
Delhi Daredevils team: Yuvraj Singh, Z Khan, JP Duminy, MK Tiwary, A Mishra, SS Tiwary, AD Mathews,CM Gautam, KM Jadhav, Rahul Shukla, J Unadkat, Imran Tahir, Mohammed Shami, Shahbaz Nadeem,Mayank Agarwal, Quinton de Kock, Nathan Coulter-Nile, Gurinder Sandhu, Domnic Joseph, Shreyas Iyer,Jayant Yadav