As New Zealand prepare to take on South Africa in the first semi-final of the 2015 World Cup on Tuesday, we take a look at Kiwis' unbeaten run in the World Cup thus far.

As New Zealand prepare to take on South Africa in the first semi-final of the 2015 World Cup on Tuesday, we take a look at Kiwis' unbeaten run in the World Cup thus far.

Beat Sri Lanka by 98 runs at Christchurch: The Kiwis kicked off the World Cup with an emphatic victory over the Lankans in the tournament opener at Christchurch. Batting first, they put up a massive score on board thanks to half-centuries from Brendon McCullum and Kane Williamson at the top of the order, and a brilliant 75 from Corey Anderson at a fast clip. They the put up a perfect bowling display as well, with Tim Southee, Trent Boult, Adam Milne, Daniel Vettori and Anderson all taking two wickets each. 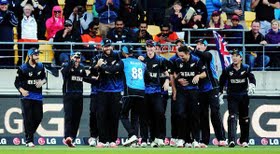 Beat Scotland by 3 wickets at Dunedin: The New Zealanders had a disappointingly close shave against the minnows. After rolling the opponents over for 142 thanks to 3-fours from Vettori and Anderson, an overconfidence New Zealand lost seven wickets in the chase before scraping through.

Beat England by 8 wickets at Wellington: The Kiwis completely thrashed an disoriented English outfit. Bowling first, Tim Southee claimed 7 for 33 as England were rolled over for 123. McCullum then trampled his way to 77 from merely 25 balls to see Kiwis win with 226 balls to spare.

Beat Australia by 1 wicket at Auckland: In a low-scoring thriller, New Zealand got the better of Australia by 1 wicket. Boult's five-for kept Australia to 151, but Mitchell Starc picked up six off his own to cripple New Zealand. The ice-cool Williamson made 45 from 42 to steer Kiwis home. Beat Afghanistan by 6 wickets at Napier: It was Vettori's turn to shine. His 4 for 18 restricted Afghanistan to 186. Guptill then hit a half-century and McCullum chipped in with 42 as Kiwis won by six wickets.

Beat Bangladesh by 3 wickets at Hamilton: Mahmudullah's 128 helped Bangladesh post 288 batting first. However, Guptill made 105, and Taylor chipped in with 56 as the Kiwis won by three wickets.