CSK Vs RR: Hussey’s genius set up the chase perfectly for Chennai

It is not often that a T20 hundred ends up in a losing cause. Shane Watson achieved this dubious distinction on Monday when, despite his superlative ton, Chennai Super Kings went on to emerge victors against Rajasthan Royals at Chepauk.

It is not often that a T20 hundred ends up in a losing cause. Shane Watson achieved this dubious distinction on Monday when, despite his superlative ton, Chennai Super Kings went on to emerge victors against Rajasthan Royals at Chepauk. To marginalise a knock of the magnitude Watson played, somebody from Chennai needed up come up with an extra-special effort on the day. And, the hosts found their hero, another Aussie, in Michael Hussey. Bringing all his experience into play, the recently-retired cricketer compiled an innings that could only be termed as pure genius.

Well aware that Chennai needed to go after the bowling from the very start, Hussey ensured that the chase began in right earnest. Even though the unpredictable Murali Vijay fell early, Hussey did not hold himself back. Of course, he didn’t have an option. Having said that, he could have been excused had he also lost a wicket going for a big stroke. Instead, he forged together a wonderful partnership with Suresh Raina, who also gave excellent support to Hussey. The two left-handers matched each other stroke to stroke. What the duo did very well was to find the gaps consistently. 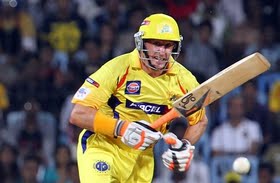 The most striking aspect of the Hussey-Raina alliance was that they found boundaries at will, batting as if the fielders never existed. Rarely did they mistime a stroke, a feature of their run-scoring which pretty much doomed the Royals. After putting up a mammoth target on board, the visitors would have been confident of defending the same, but to put it in plain words, Hussey and Raina did not give them any chance to make a match out of the big score their batsmen had notched up. Even as Hussey kept hitting boundaries over after over, Raina rotated the strike frequently when not hitting the big shots, as a result of which the run-rate was always within reach.

Following Raina’s dismissal, Hussey ensured that there were no hiccups, continuing to blaze away. However, when he was run-out by Rahul Dravid (the only way he looked like getting out), the Royals’ hopes were raised again. It was around this time that James Faulkner came up with a wonderful spell of bowling to dismiss M S Dhoni and Ravindra Jadeja in quick succession. The two big wickets brought the Royals right back into the game. Dwayne Bravo though held his nerve very well under pressure to take his side home, proving his value to Chennai again.

Earlier in the day, Watson came up with a magnificent knock for the Royals. The unbeaten century definitely did not deserve to end up on the losing side. Having lost their way in the middle, it was courtesy Watson’s belligerence that the Royals managed to find their way back in the game. All-rounder Stuart Binny came up with yet another smart cameo to give the visitors a great chance of putting Chennai under pressure. The way Hussey batted on the day, the pressure was back on the Royals in no time.

Turning point of the game: Bravo’s last-over six. Ten were needed off four balls when Bravo thumped Watson for a maximum. Game over!