Former South Africa all-rounder Lance Klusener feels all-rounder Hardik Pandya will be vital for India’s chances if they want to do well in the Test series.

Former South Africa all-rounder Lance Klusener feels all-rounder Hardik Pandya will be vital for India’s chances if they want to do well in the Test series.

“An all-rounder of the quality of Pandya gives India the edge both with the bat and ball. He is an exciting talent who provides balance to the Indian unit. Pandya -a medium-pacer who comes to bat lower down the order – provides skipper Virat Kohli with a lot of options with team combination,” Klusener told Times of India. 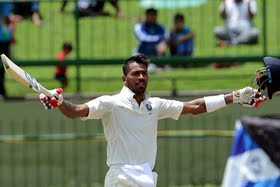 Klusener went on to add “I expect the South African bowlers to use the short ball against him. But if he survives those initial moments and gets his eye in, then Pandya could be lethal.”

The Zimbabwe’s batting coach also opined that Kohli will have to score big for India to do well. “If India aim to win this series then Kohli will have to score. He would be tested and it gives our bowlers a chance to know how good they are when they bowl to one of the best batters in the world currently,” he further told Times of India.