India fast bowler Jasprit Bumrah has lost his number one spot in the ICC ODI bowling rankings after a poor show in the one-dayers against New Zealand.

Bumrah did not pick up a single wicket in the three matches as India lost the series 3-0. The 26-year-old dropped 45 points to slip to number two in the rankings. Kiwi left-arm seamer Trent Boult has moved up to the top spot despite having been ruled out of the India series due to hand injury.

While Bumrah went wicketless, Navdeep Saini also did not manage to make an impression in the two matches that he played while Shardul Thakur was highly expensive even though he picked up a few wickets. The spinners Ravindra Jadeja and Yuzvendra Chahal had a decent series, with the latter claiming six wickets in two matches. Following his efforts, Chahal has moved three places up to 13th in the ICC ODI rankings 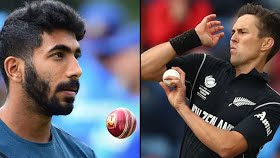 Among the batsmen, Indian skipper Virat Kohli has retained his number one spot in the ICC ODI Batting Rankings despite a poor series in New Zealand. He currently has a total of 869 points. His deputy Rohit Sharma, who had been ruled out of the ODIs and Tests with a calf injury, is behind him with 855 points.

Kohli managed only 75 runs in the ODI series, which hurt India badly as both openers Rohit and Shikhar Dhawan were unavailable Pakistan batsman Babar Azam is at number three on the list with 829 points while Ross Taylor is at number four with 828 points after an impressive ODI show against India.

Taylor was instrumental in New Zealand's ODI series win against India with a century and a half-century. After being thrashed 5-0 in the T20Is, the Kiwis recovered to blank India 3-0 in the one-dayers.