Thisara Perera clinched a magical hat-trick as Sri Lanka defeated Pakistan by 44 runs in the Fourth ODI at the R Premadasa Stadium in Colombo. With this victory, Sri Lanka lead the 5-match Series 2-1.

Thisara Perera clinched a magical hat-trick as Sri Lanka defeated Pakistan by 44 runs in the Fourth ODI at the R Premadasa Stadium in Colombo. With this victory, Sri Lanka lead the 5-match Series 2-1. Pakistan’s batting was once again disappointing as they collapsed from a relatively strong position of 166 for 2 in the 38th over to 199 all out in 45 overs!

The 41st over of the innings proved to be a disaster for Pakistan as they lost four wickets for no runs in which Perera got his hat-trick and also affected a run out. Once again, Azhar Ali played well but his knock went in vain for the second time in this series. 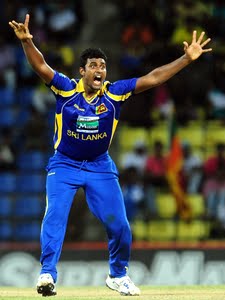 The Pakistani run chase of 244 got off to a terrible start when Mohammad Hafeez got out for a duck in the first over pulling Lasith Malinga into the hands of square fine leg. The visitors then got a steady partnership of 53 for the 2nd wicket between Azhar Ali and Asad Shafiq. That stand was broken in the 14th over when left-arm spinner Sujeewa Weerakoon had Shafiq (25 from 34 balls) lbw in a flick shot played right across his frontpad.

The visitors consolidated through the 3rd wicket with Azhar Ali and Misbah-ul-Haq scoring half centuries and providing a sound platform for the run chase. The Pakistani duo put up 113 runs before Misbah was caught by a diving Kulasekara at mid off in the 38th over while trying to smash Malinga for a boundary during the batting powerplay. In the very next over, Umar Akmal perished as he edged a drive off a lovely outswinger from Kulasekara to the keeper leaving Pakistan at 169 for 4.

An under Younus Khan failed to deliver the goods once again and he nervously got out steering Perera to the diving Sangakkara in the 41st over. In the next ball, Shahid Afridi moved on the backfoot and punched too early to spoon a simple catch to covers. Perera clinched the hat-trick when he had Sarfraz Ahmed edging his backfoot drive to an alert Mahela Jayawardene at slip. It was the 7th hat-trick for Sri Lanka in ODI history.

By the end of the 45th over, Pakistan were bowled out for 199 with Thisara Perera finishing with 4 for 42. Azhar Ali remained unbeaten on 81 (from 126 balls with 4 fours and a six). Perera got the Man of the Match award.

Sri Lanka posted a healthy total of 243 for 8 in the fourth ODI at R Premadasa Stadium in Colombo. The Sri Lankan innings saw a brief rain interruption in the 26th over when the hosts were struggling at 91 for 3. Luckily play resumed without much time lost and as a result no overs were cut in the match.

The Lankans lost an early wicket in the form of Upul Tharanga (4) in the 3rd over when the left hander edged his drive to second slip off Umar Gul. After that early blow, Sri Lanka were steadied by a 55-run stand between Tillakaratne Dilshan and Sangakkara. Dilshan (24 from 47 balls) departed in the 17th over when he was given lbw trying to play a rash predetermined sweep off a flat delivery from Mohammad Hafeez. Pakistan got one more wicket before the rain arrived which was that of Dinesh Chandimal (18 from 30 balls), who was bowled after getting cramped up for room while cutting a Hafeez delivery.

After the rain break, Sri Lanka consolidated beautifully through the pair of Sangakkara and Skipper Mahela Jayawardene. The batting powerplay taken in the 36th over yielded 49 runs to provide the much needed momentum for the homeside. Sangakkara, who was put down by Umar Gul at long on, turned things around by smashing three sixes as Sri Lanka approached the slog overs.

In the 44th over, Pakistan fought back as Sohail Tanvir yorked Mahela Jayawardene (40 from 50 balls with 4 fours) to end what was a 110-run stand with Sangakkara. Sri Lanka lost the big wicket of Kumar Sangakkara in the very next over with the left hander missing out on a century by just three runs! Sangakkara (97 from 130 balls with 7 fours and 3 sixes) was brilliantly caught by a forward diving Azhar Ali at deep mid wicket while attempting to pull a long hop from Saeed Ajmal.

Sri Lanka lost the momentum in the final overs to end up with 243 for 8. Sohail Tanvir bowled quite well at the start and also at the end to finish with 10-2-43-2. Shahid Afridi bowled out his 10 overs for just 36 runs but that was before Sangakkara and Mahela had got going in their innings. The other bowler who did a great job for Pakistan was Mohammad Hafeez with 2 for 37 in 10 overs.

Toss and Teams: Hosts Sri Lanka have won the toss and elected to bat first in the 4th ODI at the R Premadasa Stadium in Colombo. Both Sri Lanka and Pakistan have gone in with the same sides that featured in the rained out third ODI. This fourth ODI and the fifth ODI will have reserve days. All efforts will be made to atleast have a 20-over contest in case of rain interruptions. If even that is not possible then the match resumes from the same situation on the reserve day.