AUS vs IND 1st Test: Blunder Down Under

“It is happening, it isn’t a nightmare”. This tweet by Harsha Bhogle perfectly summed up every cricket fan's ordeal on the third day of the Adelaide test between India and Australia. A lot of records were created on that day, none of which India would be proud of. Their lowest team score, no batsman getting a double digit score, lowest team total of this century thus far, the list goes on and on. It’s almost ironic that India’s highest test score of 759 also came on the same day, 19th December, four years ago against England.

So, what exactly happened out there? There sure weren’t any demons in the pitch as the Aussie batsmen strolled to the target of 90 with eight wickets in hand just an hour after India had put on their worst batting display till date to be skittled for just 36 runs. Coming to bat at 9-1, the batsman might have planned to bat the opposition out, as they already were sitting on a healthy lead of 62 with the opposition under pressure. 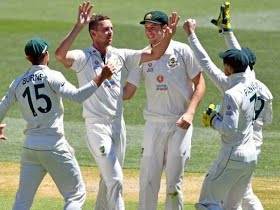 But it was the duo of Cummins and Hazlewood that ran through India’s batting. “Nicked and gone” was the order of the day, at least in the first hour and a half. Hazlewood registered unrealistic figures of 5-8 while Cummins bagged 4 wickets and gave away only 21 runs. Both bowled probing lines just outside off stump to make the batsmen play and found the edge on most occasions. The catching behind the stumps was as impeccable as ever with Paine leading the way with five catches. Kohli went chasing after a wide ball from Cummins, only to be caught by Cameron Green at gully. Mayank Agarwal top scored for India with 9 runs while Pujara, Rahane did not trouble the scorers at all.

Such was the trauma created by the Aussie bowlers that India’s chances ahead look bleak, given the fact that their skipper will take no further part in the series and Shami being injured. It wouldn’t be wise to predict the outcome of the series basis just one session of cricket, but momentum is a big thing in cricket. Rohit Sharma might be available for the third test and this will give India some respite, but they have a lot to ponder over in the next 6 days ahead of the boxing day test at Melbourne.