Whenever Warner walks in to bat, Ash is always happy: Pujara

Australian opener David Warner has managed just 98 runs in four innings of the two Tests against India so far. He has been dismissed by Ravichandran Ashwin three times, including in both innings

Australian opener David Warner has managed just 98 runs in four innings of the two Tests against India so far. He has been dismissed by Ravichandran Ashwin three times, including in both innings at Bengaluru. The Indians have decided to rub it in as the teams head to Ranchi.

Indian batsman Cheteshwar Pujara took a dig at Warner's struggles against Ashwin, who has dismissed him nine times in his career, the most by any bowler. "They were always under pressure when they walk into bat. I wanted to make sure their batsmen are thinking about it. Especially David Warner. Whenever he walks in to bat, Ash is always happy. So I always keep reminding him that Ash is the one," Pujara said in a video interview with Ashwin posted on the BCCI website. 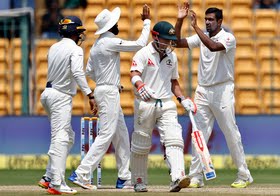 Warner averages close to 50 in Australia, but on the sub-continent, his average drops to 24.41.

In a report by Reuters, Warner said that he was not to impressed by the video but added that he would not respond in kind. "It’s just a rule of the cricketing world you keep everything on the field. But that’s up to them. From our point of view, we’ll never do that," Warner said.

“At the end of the day we’re professionals and you have to move on from that stuff. Hopefully both teams will come out and play with the spirit of cricket," he went on to add.

Warner went on to add that the manner in which Virat Kohli went public against Aussies was rather awkward, but stated it is better to move on. "There's going to be a lot of niggles here and there around certain things, and I think just a few people got out of hand and I think everyone has reined it back in again. So we're looking forward to getting out to Ranchi and playing a great brand of cricket," the swashbuckling opener signed off.