We ticked all the boxes: Dhawan analyses India's match-winning effort against Australia

Shikhar Dhawan continued his impressive run in ICC tournaments, blasting 117 from 109 balls as India outshone Australia by 36 runs in the World Cup 2019

Shikhar Dhawan continued his impressive run in ICC tournaments, blasting 117 from 109 balls as India outshone Australia by 36 runs in the World Cup 2019 clash at The Oval on Sunday.

Apart from Dhawan, both Rohit Sharma and skipper Virat Kohli hit half-centuries while Hardik Pandya and MS Dhoni delivered the killer blows in the death overs as India posted a mammoth total of 352.

Then, with the ball, Bhuvneshwar Kumar and Jasprit Bumrah did not allow the Aussie openers to get away, as both finished with figures of 3 for 50 and 3 for 61. Yuzvendra took picked up a few crucial wickets in the middle ensuring Australia were never in the chase. 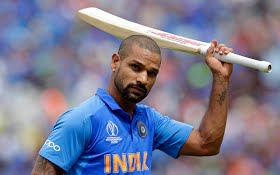 David Warner scored and laborious fifty and Steve Smith hit one at a run-a-ball, but the Aussies were throughout behind the equation. Despite a blistering knock by Alex Carey towards the end of the innings, they folded up for 316.

"We ticked all the boxes today. We knew they are a great side and the match will go down to the wire. We need to continue ticking the boxes in upcoming matches. The fans are having a great time and they'll be happy with this win," he added.

"Very happy with the performance overall. We are a great fielding side, we took great catches. We have a good bowling side, great spinners as well. We work really hard in the nets, our process is very strong that's why the results are going our way," the opener went on to say.

Dhawan injured his left thumb during the innings and hence could not field as he watched from the sidelines. India now faces New Zealand on June 13 in their third match of World Cup 2019.