A tremendous spell of 4 for 16 from Mohammad Hafeez saw South Africa collapse to a disappointing 253 on the opening day’s play of the First Test at Johannesburg. Most of the South African batsmen got starts but failed to convert them into bigger scores while the Pakistanis chipped away at the wickets.

A tremendous spell of 4 for 16 from Mohammad Hafeez saw South Africa collapse to a disappointing 253 on the opening day’s play of the First Test at Johannesburg. Most of the South African batsmen got starts but failed to convert them into bigger scores while the Pakistanis chipped away at the wickets. Yet South Africa had the upper hand at 232 for 5 before losing its last five wickets in a heap! The visitors ended Day at 6 for no loss after surviving two testing overs.

South Africa got off to a decent start before losing its two openers – Alviro Petersen and Captain Graeme Smith minutes before lunch. Junaid Khan provided the first breakthrough when he had Petersen (20) caught in the slips off a leading edge followed up by Umar Gul forcing Graeme Smith (24) to nick him behind with SA at 46 for 2.

The hosts recovered nicely after that with Jacques Kallis and Hashim Amla putting on yet another good partnership. That was broken when Asad Shafiq at deep mid wicket dived forward to catch a top edged pull from Kallis (50 from 78 balls with 9 fours) off Umar Gul. With the addition of 10 more runs, the Proteas were back in a spot of bother at 135 for 4 when the well set Hashim Amla (37) fell to the part-time medium pace of Younis Khan who induced a flashy cut shot which was caught by the diving Azhar Ali in the slips. 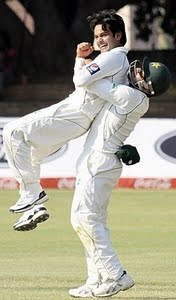 SA started to recover again, this time through AB de Villiers and Faf du Plessis. The duo nearly took their team to 200 before AB de Villiers (31) was caught behind edging a cover drive off a straighter one from Hafeez. Pakistan after this wasted no time in bundling out the Proteas from 199 for 5 to 253 all out. Faf du Plessis (41 from 107 balls) was next man to be dismissed, in a freaky manner when a forward defence of his, rolled back onto the stumps off a bottom edge. Junaid Khan was the wicket taker with quite an innocuous delivery.

Mohammad Hafeez then claimed three wickets that of Robin Peterson (0, leaving an arm ball and getting bowled), the unconvincing Dean Elgar (27, caught down the legside by the keeper) and last man Morne Morkel (0, cleaned up by a skidding drifter). The only man in the bottom half not to be dismissed by Hafeez was Philander who was run out.

It was a great day for Misbah-ul-Haq as the Captain as every move of his had the Midas touch. He brought in Younis Khan to give rest to his quicks and in turn got the big wicket of Amla. Later in the day, he brought in Hafeez and got the prized scalp of De Villiers and brought him back at the time of taking the second new ball and saw the move pay rich dividends. Hafeez turned the match on its head on Day 1 taking four wickets in just 7.2 overs!

Toss and Teams: South Africa have won the toss and elected to bat first in the opening Test at the New Wanderers Stadium in Johannesburg. Skipper Graeme Smith will be leading South Africa for a 100th time in Test Cricket, today also being his birthday.

The pitch at the Wanderers has a greenish tinge to it and should be assisting the pace bowlers. Pakistan have given debuts to Nasir Jamshed and left-arm pacer Rahat Ali.