Having survived two batting lapses against Afghanistan and West Indies, India will be keen to clinch their World Cup semis spot with a victory over hosts England

Having survived two batting lapses against Afghanistan and West Indies, India will be keen to clinch their World Cup semis spot with a victory over hosts England at Edgbaston. The Englishmen, despite recent reverses, won't be pushovers though, for they have a point to prove.

Even though India and England have had contrasting fortunes in recent times, both sides have worries of their own. India may be unbeaten, but their weak middle-order was critically exposed against Afghanistan and West Indies. They will have to seriously look into this issue. England, on the other hand, must stop the slide they have found themselves in during chases.

India may ring in a change to try and strengthen their middle-order. Vijay Shankar, despite the opportunities he has got, failed to shine with either bat or ball. There is a probability that India could bring in Rishabh Pant or Dinesh Karthik or perhaps even go in with three spinners and select the all-round services of Ravindra Jadeja. Whatever the decision, the middle-order better start performing else India could find themselves in trouble at a crucial juncture. 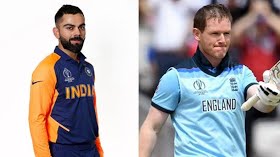 Skipper Virat Kohli has continued his great form with four fifties but it is somewhat surprising that he hasn't been able to convert any of the half-centuries into three-figure scores. This is something they would be keen to set straight in the remaining matches. The toss-up between Mohammed Shami and Bhuvneshwar Kumar would also be an intriguing one since the former has really grabbed his chances with both hands, lending a great helping hand to Jasprit Bumrah.

It would be interesting to see what kind of a role the spinners play against the Englishmen. Kuldeep Yadav and Yuzvendra Chahal did trouble the England batsmen to some extent when India last visited here. However, England recovered very well to keep them and bay and clinch the series. The hosts would be expecting that kind of performance again.

England has been brilliant batting first, but the same threatening men look out of sorts when chasing very much gettable targets. The good news for England is that Jason Roy is expected to be ready for the game and reclaim his spot at the top of the order in place of the woeful James Vince. The batting will really have to stand up though. Apart from Ben Stokes, no one has made a significant contribution in the last two games. The time has come for Eoin Morgan, Joe Root, and Jos Buttler to prove that this England side is not made of flat track bullies.

The hosts have had to cop a lot from ex-cricketers after the last two losses. The war of words between Michael Vaughan and Jonny Bairstow has turned rather ugly. As such it would be better for the team to make statement on-field instead of letting things turn nasty off it. The bowling has been in good shape but Jofra Archer will need to find some of his rhythms back. It remains to be seen if they make any changes in the bowling to twist their fortunes against India.