If at all there was any sense of optimism over the Indian batting coming back to form at one of their favourite venues, Eden Gardens in Kolkata, that has been thrown out of the window following embarrassing batting collapses in both innings of the Test. It is about time now that the selectors realize that the big names in the team are not so big anymore.

If at all there was any sense of optimism over the Indian batting coming back to form at one of their favourite venues, Eden Gardens in Kolkata, that has been thrown out of the window following embarrassing batting collapses in both innings of the Test. It is about time now that the selectors realize that the big names in the team are not so big anymore. Over the years, they have made crucial contributions to India’s progress as a team that has done both in Indian conditions and abroad as well. But that time is now a time of the past.

A look at the performance of India’s celebrated names in the batting department in this series alone is enough to determine that they are well past their best by now. 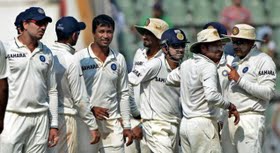 Virender Sehwag: The swashbuckling opener began the series with a bang only to wither away, as he has often done in the past. His 117, which played an important role in India’s win at Motera, has been followed by utterly disappointing scores – 25, 30, 9, 23 and 49. Some of his dismissals have been soft. Being run out in the first essay at Eden was unacceptable and being bowled through the gate in the second was nothing short of an embarrassment.

Gautam Gambhir: What was he thinking when he dabbed at a ball well outside off-stump on the fourth day of the Kolkata Test? Also, he did not help the team’s cause by being involved in run-outs in both the innings of the Test. At the start of the series, Gambhir said that he and Sehwag are India’s best choices as opener as that they necessarily don’t have to be involved in big stands to prove their worth to the team. Well, the left-hander has been true to his words –his scores in the series say it all. 45, 4, 65, 60, 40.

Sachin Tendulkar: One half-century at the beginning of the year and one at the end. Only a name like Tendulkar can manage to hold on to his place in the team on the basis of that effort. Then again, don’t be surprised because the selectors have retained him for the Nagpur Test citing they need his experience more now than ever, and this even if he continues failing with the bat. Tendulkar’s scores in the series mirror those of India’s woes. He was dismissed for 13 in the only innings at Ahmedabad and since has registered scores of 8, 8, 76 and 5. Wonder how many more chances he will get to prove himself all over again.

Yuvraj Singh: Till VVS Laxman was in the side, many considered this left-hander unlucky not to be part of the Test playing XI. However, it is equally true that he hasn’t utilised the opportunities that have come his way. The England series has been no different. Very much like friend Sehwag, he began on a promising note by making 76 at Motera, but has been far from efficient since with scores of 0, 8, 32 and 11. Some of his shot selections have been outright atrocious. Isn’t it time to look somewhere else at least now?