Hard to see a special talent like Rohit sitting out: Rahane

Rohit Sharma, who is all set to open the innings in the first Test against South Africa at Visakhapatnam starting on October 2

Rohit Sharma, who is all set to open the innings in the first Test against South Africa at Visakhapatnam starting on October 2, after failing to secure a spot in the middle order in West Indies, has now found support in middle-order batsman Ajinkya Rahane. Rohit’s Mumbai teammate in the Ranji Trophy opines that it is hard is see a talent like Rohit sitting out, and adds that he is confident of the Mumbai Indians skipper doing well.

"I don't know yet whether Rohit will open the innings. If he does, I will be happy for him. I said in West Indies also, it is hard to see a special talent like Rohit sitting out," Rahane, the Indian vice-captain was quoted as saying in media reports.

Rohit was part of the Test squad in West Indies but had to sit out as Hanuma Vihari was preferred over him and ended up putting a man of the series-winning performance. 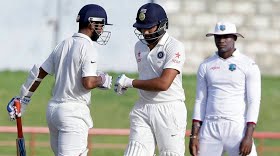 So far, Rohit has scored three hundred in 27 Tests at an average of just under 40. His technique and shot selection have come into question on a number of occasions in the longer format. The team management is however of the view that Rohit deserves another chance to cement his Test spot.

Rahane seconds the opinion and expresses the belief that Rohit has the game to do well in Tests if he is given a longer rope. "He has worked so hard and if he gets an opportunity, I am sure, he will do well," Rahane added.

"We all know the quality he has - special talent. Test cricket is all about mindset and ODI cricket, you can just go out there and back yourself. In Test cricket, sometimes if two bowlers are bowling good spells, you need to respect that and come out strong and play your game after that," the Indian middle-order bat, who registered his first Test century in two years in West Indies, went on to state.

Former India skipper Sourav Ganguly and current batting coach Vikram Rathour have also opined that Rohit must open in Tests and see how he goes.

Rohit had a wonderful World Cup 2019 in which he scored as many as five hundred, including three in a row before falling in the semi-final.

He is slated to open the innings with Mayank Agarwal, who has scored three fifties in his first four Tests, in the first Test against South Africa scheduled to be played from October 2.