Lokesh Rahul was dismissed after crossing his fifty for the fifth time in the series, on day two at Dharamsala. He fell to a poorly executed hook shot off Pat Cummins

Lokesh Rahul was dismissed after crossing his fifty for the fifth time in the series, on day two at Dharamsala. He fell to a poorly executed hook shot off Pat Cummins.

However, speaking to the media at the end of day’s play, he said he did not regret the shot. "Quite honestly, not regretting anything. Obviously, a little disappointed that I have not been able to convert the starts and get big runs for the team. As an opening batsman, my responsibility is to spend as much time in the middle as I can, try and get big scores in the first innings so that we don't have to bat in the second innings,” he explained. 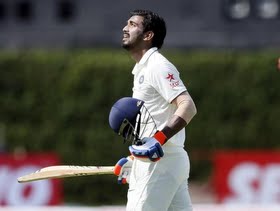 "On a personal front, hasn't been the worst series for me. Got starts, batted really well, enjoyed batting in the middle, and the Aussie bowlers haven't made it easy. They have challenged us in all the games. Thoroughly enjoyed batting and hopefully one good knock in the second innings. Might be the knock I have been waiting for the whole series,” the opener added.

Rahul though admitted his execution of the hook shot that led to his dismissal was poor. "Horrible execution for sure. But having batted out there in the middle for a long time, I thought I could have taken him on as there were no fielders at the back. Like I said, horrible execution, the intent was right.

"But I can always sit here and question intent and a hundred things. But then in the middle, I thought I could take him on but it was unfortunate it didn't go my way. Hopefully, in the second innings, I can get him away. So I will go out with a positive intent in the second innings again," the in-form batsman further said.