Defending champions Sri Lanka will kick-off their World T20 defence against Afghanistan at Eden Gardens in Kolkata on Thursday. On paper, this should be a straightforward match for the 2014 winners

Defending champions Sri Lanka will kick-off their World T20 defence against Afghanistan at Eden Gardens in Kolkata on Thursday. On paper, this should be a straightforward match for the 2014 winners, but things could get tricky considering the contrasting forms of the two teams. Although it were the qualifiers, Afghanistan put up scintillating displays to overcome Scotland, Hong Kong and Zimbabwe, winning all games by impressive margins. Sri Lanka, on the other hand, will head into the event having lost to New Zealand and Pakistan in the warm-up matches. They had a poor Asia Cup before that.

Lack of match-winners have been ailing Sri Lanka in both the batting and bowling departments. The form of former skipper Lasith Malinga, who led the team to triumph in 2014, has been the biggest and constant worry for the team, before and after his comeback. Nothing has changed as the Sri Lankan think-tank will be pondering upon their main bowler's availability going into the clash. The form of their most experienced batsman Tillakaratne Dilshan will also worry the team. The opener just hasn't looked him the player of old in recent times. This will definitely be Dilshan's last World T20, and he would like to go out on a high.

Apart from the two above, Sri Lanka will need to figure out a few players who must make crucial contributions. Skipper Angelo Mathews is definitely one of them. He can open the bowling, is clever with his variations, and can definitely hit the big shots with the willow. Dushmantha Chameera is another player to watch out for. He grew in stature during the tour to New Zealand, and ever since has been a different bowler. Against an Afghanistan batting line-up, which is inexperienced at the international level, he could prove to be a handful. They will be missing Kusal Perera at the top of the order, but Dinesh Chandimal has the experience to make up for it. 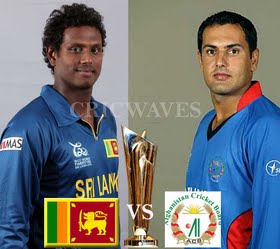 Afghanistan would not be expected to win even considering Sri Lanka's weaknesses, but they would be confident of putting up a good show. They troubled Sri Lanka previously as well, but for them to have any faint chances of winning their form batsmen will have to be at their best against a decent Lankan bowling attack. Mohammad Shahzad has rocked at the start, with 61 against Scotland and 41 against Hong Kong. Also, Mohammad Nabi has starred with both bat and ball. He is a high quality player, who has proved his worth time and again, even against strong sides.

Apart from Shahzad and Nabi, the skipper Asghar Stanikzai himself has been in decent form. Then there is also Samiullah Shenwari who has turned games around for the team with the bat. In the bowling department as well, Afghanistan have some generous talent. Shapoor Zadran and Dawlat Zadran have been leading the attack for a while now, and have been doing a good job of it. But, it is 17-year-old leg-spinner Rashid Khan who could be the X-factor, as he has proved efficient in the qualifiers. Afghanistan will come hard at Lanka, knowing their weaknesses, but the defending champs will be gutted if they lose.