Jasprit Bumrah, on Saturday, became only the third Indian after Harbhajan Singh and Irfan Pathan to claim a hat-trick in Test cricket.

Jasprit Bumrah, on Saturday, became only the third Indian after Harbhajan Singh and Irfan Pathan to claim a hat-trick in Test cricket. The fast bowler finished the day with 6 for 16 to leave West Indies were in the dumps at 87 for 7.

This was after Hanuma Vihari notched up his maiden Test hundred and Ishant Sharma brought up his first Test fifty to lift India to 416. India lost Rishabh Pant to the first delivery of the day, cleaned up by Jason Holder, who finished with 5 for 77. However, Vihari and Ishant ensured India crossed 400.

Bumrah gave West Indies an early setback when he got John Campbell to edge one to Rishabh Pant in the seventh over. It was the ninth over of the innings that produced the hat-trick as Bumrah sent back Darren Bravo, Shamarh Brooks and Roston Chase off consecutive deliveries. 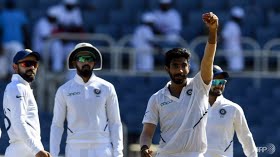 Bravo was caught in the second slip by KL Rahul while Brooks and Chase were trapped lbw. Brooks reviewed after being given out but got no reprieve. On the other hand, Virat Kohli reviewed after Chase was adjudged not out to ensure Bumrah got his deserved hat-trick.

Kraigg Brathwaite, who was watching all the horror unfold from the other end, also fell to Bumrah for 10 to leave West Indies reeling at 22 for 5. Shimron Hetmyer and Jason Holder then featured in a rebuilding stand of sorts. It wasn't to last long enough though. Hetmyer was cleaned up by Mohammed Shami for 34 while Bumrah returned to claim Holder.

West Indies trail by 329 runs with only three wickets left, and three days to go. While Bumrah was the standout performer, the day also belonged to Vihari, who continued to justify his selection ahead of Rohit Sharma. His 111 off 225 balls, featuring 16 fours, was a high quality knock.

Ishant also deserved credit for his 57 from 80 balls. The duo added 112 for the eighth wicket as India gained ascendancy. Vihari had missed out on three figures in Antigua, but this time ensured he crossed the line with a single off Roach in the 133rd over, his 200th delivery.

Ishant got his maiden half-century with a single off Rahkeem Cornwall off his 69th delivery. He fell soon after, trying to break free, as did Shami. Vihari was last man out for 111, as he holed out to give Holder a much-deserved five-for.