Shreyas Iyer on No.4 debate: Totally management's decision where they want to play me

The ODI series against West Indies will be an opportunity for young Shreyas Iyer to cement his place at the number four slot. Despite being around the domestic

The ODI series against West Indies will be an opportunity for young Shreyas Iyer to cement his place at the number four slot. Despite being around the domestic circuit for sometime and some impressive performances, Iyer has only played five ODI innings so far in which he has two fifties to his name.Iyer did not feature in the 2019 World Cup squad and, in fact, last played an ODI for India in February 2018. However, he is now ready to seize his opportunity against West Indies, provided he gets them. "It's really important for me as a youngster, coming into the side after a year again to cement my position. When you have to cement your position, you will be needing opportunities, and I feel that I will be getting that opportunity this time and I will be making the best use of it," Iyer was quoted as telling the media ahead of the second ODI against the Windies. 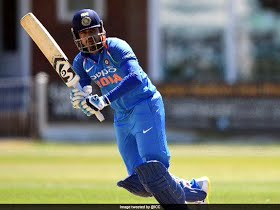 Iyer knows that he is among the candidates for the number four spot, but adds that he is ready to bat anywhere for the team's cause, and so is not much bothered about his batting position."It's totally the management's decision where they want to play me," he said. "It's definitely a vacant spot and they are trying to give chances to youngsters to play in that position. Currently, no one is settled in that position."Personally, I am not thinking about batting only at No.4. I want to be someone who is very flexible batting at any number or if you go into any situation you should be able to grab that opportunity and make the best use of it," Iyer added.On the overall success of the team, Iyer explained that it has been because various individuals have put their hands up at different points of time, which has helped the team stay consistent over a period of time. "We have just come out of T20s, which we won. The way the team is playing currently, it's totally amazing. If one doesn't perform, the next one raises his hand and he takes the responsibility to take the team through and this is what has been happening throughout the year," the middle-order batsman went on to add.Both India and West Indies will be hoping for the weather to stay alright so that a match would be possible. On 13 overs were played in the first ODI at Guyana.--By A Cricket Correspondent