England has Dernbach to replace Anderson for 2nd Test

England has summoned Jade Dernbach to replace their injured key bowler, James Anderson, for the second Test match against the visiting Sri Lankans, which will start from 3rd June, 2011, at Lord’s, London.

England has summoned Jade Dernbach to replace their injured key bowler, James Anderson, for the second Test match against the visiting Sri Lankans, which will start from 3rd June, 2011, at Lord’s, London.
England’s cricket team coach, Andrew Flower, has welcomed the inclusion of Dernbach and has predicted that he will deliver the required results for them.
Dernbach was impressive in the second tour match representing England Lions against Sri Lanka. The match was played from 19th to 22nd May, 2011 at County Ground Derby, which the visitors won by 38 runs. 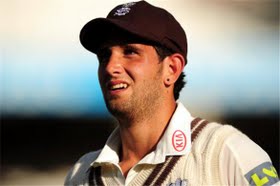 He grabbed five wickets at an economy rate of 3.21 runs per over in the first innings and four wickets at an average of 3.81 runs per over in the second innings. He ended up with nine wickets, which brought him into the limelight.
Andy Flower also took notice of him:
"I haven't seen much of him to be honest. I've seen him bowl once, at Derby against Sri Lanka, where I think he got nine wickets in the match and bowled very well. He bowls outswing, he's got a good bouncer and slower ball and he can bowl for long periods”.
Jade Winston Dernbach was born on 3rd April, 1986 in Johannesburg, South Africa, a right arm medium-fast bowler and right hand batsman, who has represented Surrey, England Lions, and, Surrey 2nd XI.
He is a tall bowler, who has the ability to swing the ball, and has the capability to deliver the ball with speed and accuracy.
England achieved a stunning victory against Sri Lanka, defeating them by an innings and 14 runs with a strong display of bowling in their second innings. The Lankans were bowled out at for a mere 82 runs in 24.4 overs,Chris Tremlett, and, Graeme Swann wrecked their batting by grabbing four wickets each and Stuart Broadclaimed two wickets.
England wants to keep their winning momentum and that’s why they have called up the promising youngster, Dernbach, for the second Test. The coaches have also shown faith in Dernbach, and, Flower is full of praise for him. He remarked:
"The coaches have been impressed with him and we just wanted another option, with James Andersonstepping out, other than the tall bowler in Steven Finn.We'll monitor the conditions at Lord's and pick what we think is the best line-up".