The 2012 Champions League T20 was held in South Africa. Again a qualifying round was held to finalise the 10 teams. The two groups were as follows – Group A featured Delhi Daredevils, Titans, Kolkata Knight Riders, Perth Scorchers and Auckland.

The 2012 Champions League T20 was held in South Africa. Again a qualifying round was held to finalise the 10 teams. The two groups were as follows – Group A featured Delhi Daredevils, Titans, Kolkata Knight Riders, Perth Scorchers and Auckland. Group B included Sydney Sixers. Lions, Chennai Super Kings, Mumbai Indians and Yorkshire. The teams which went out in the qualifying round were Sialkot Stallions, Hampshire, Uva Next and Trinidad & Tobago. Following the league games, Delhi Daredevils, Lions, Sydney Sixers and Titans made it to the semi-finals.

First semi-final: Lions and DD came up against each other in the first semi-final. Delhi won the toss and inserted Lions in. Delhi bowled competently to restrict Lions to 139 for 5 –Gulam Bodi made 50 and Neil McKenzie remained unbeaten on 46 for Lions. Umesh Yadav with 2 for 20 was Delhi’s most successful bowler. Delhi would have been confident of overhauling the target, but floundered instead. Kevin Pietersen’s half-century was the only score of note for Delhi. Dirk Nannes, Chris Morris and Aaron Phangiso all grabbed two wickets each for Lions. 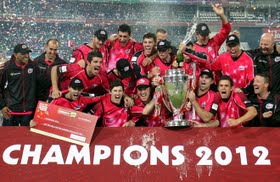 Second semi-final: Sydney Sixers clashed with Titans in the other semi-final, which went down to the wire. Titans won the toss and batted first. They put up an impressive 163 for 5 on the board. The innings was built around two half-centuries –Henry Davids’ unbeaten 59 and David Wiese’s brutal 61 from 28 balls. Mitchel Starc grabbed two wickets for the Sixers. In a tense chase, the Sixers got home off the very last ball. Not a single batsman got fifty, but there were contributions all round. Openers Steve O’Keefe and Michael Lumb got brisk 30s while three other batsmen got 20s before Pat Cummins got them through with an unbeaten cameo.

The final: The big clash between Lions and Sydney Sixers was held at Johannesburg. It was one of the biggest one-sided finals in T20 history. Lions were put into bat by the Sixers and crumbed to 121 all out on the day that mattered most. Jean Symes’ 51 was the only score of note for the Lions. Two bowlers from the Sixers’ side finished with three wickets –Nathan McCullum had figures of 3 for 24 while Josh Hazlewood ended up with 3 for 22. Chasing 122, the Sixers openers plundered the Lions’ bowlers to all parts of the Wanderers. Michael Lumb blasted 82 from only 42 balls with the aid of 5 sixes while Brad Haddin compiled a patient 37 from 33 balls. The Sixers raced to 124 in 12.3 overs and romped home to the title by 10 wickets.

Most successful players: Michael Lumb’s 226 runs from six games made him the edition’s top run-scorer. Among the bowlers, Mitchell Starc was the most successful with 14 wickets from six matches.