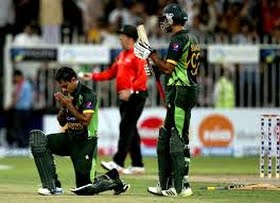 Pitch report :Dew did not seem to have formed at Sharjah for the first match, just as Misbah had predicted at the toss. If another batting-friendly pitch is prepared, the team batting first will again have an advantage.
The first ODI finished in circumstances that may have left both teams with a positive outlook for the upcoming matches. Pakistan will be buoyed by the mastery of their batsmen. Mohammad Hafeez's return to form is a valuable boost to their top order, and it was not so long ago that Ahmed Shehzad made a ton against the best pace attack around, in South Africa.
Even more heartening were Sharjeel Khan and Sohaib Maqsood's innings. Both scored briskly, but responsibly - working attack out, manipulating the field and making fine judgements as per the bowling and the pitch. So many Pakistan batsmen have burned hot in their international honeymoon only to rapidly diminish after that, so their challenge is to make good on their obvious potential in the long term.
Sri Lanka, however, will be pleased at the fight from the lower order. Seekkuge Prasanna and Sachithra Senanayake hit the highest eighth-wicket stand ever in Sharjah, reviving a chase that most would have felt was irredeemable. Prasanna, in particular, has been brought into the side with the World Twenty20 in mind and to that end, his all-round contribution on Wednesday could not have been any better. He was the most economical of Sri Lanka's bowlers - the only one to go at less than five - and he again demonstrated an affinity for big-hitting that has blossomed in his game over the last 18 months.
Somewhat surprisingly for both teams, it is the bowling that must improve for the second match. Faced with fluent batsmen on a very good batting surface, Sri Lanka's bowlers were listless and unimaginative. Their fast men attempted so many yorkers between overs 32 and 50 that Pakistan's batsmen learned to expect them and exploit the inevitable errors in length.
Pakistan's bowlers will aim to be less wayward in the second match, after having allowed indiscipline to creep in towards the later stages of Sri Lanka's innings. Their fielding too, slipped from poor to abysmal in the last hour, much to the chagrin of Misbah-ul-Haq who had warned against exactly that kind of complacency before the match. They know now that Sri Lanka are among the more dangerous teams to ease off on.
Sharjeel's 61 at the top of the order set the tone for Pakistan, but Sohaib Maqsood's 73 from 68 was arguably the more impressive innings. Maqsood not only prevented the scoring rate from waning through the middle overs, he embellished Pakistan's advantage in an innings wrought from batting intelligence, as much as skill. He worked the field beautifully in step with Hafeez and his aggressive strokes were superbly calculated. If he can consistently play similar knocks, he will ease the middle-order burden on Misbah.
At 37 Tillakaratne Dilshan's hand-eye coordination is not what it once was. Increasingly in the past year, he has missed big shots he would have connected with in his youth, and has often struggled for timing early in his innings. He has not only overcome these challenges though, he has found something within himself that has actually increased his output. He bides his time now, but when he pounces, he does so selectively and tellingly. He had averaged 134 in the five innings before his last match, and recently, he has not allowed failures to stack up in a series. He will be desperate to fire after a mediocre 30 in game one.
Ball by ball updates
Full Scorecard
Last Five Match Result :
(last five completed matches, most recent first)
Pakistan:WLWWL
Sri Lanka: LWLWW
Match Stats :
Shahid Afridi has more wickets (62) and 50-plus scores (8) against Sri Lanka, than he does against any other nation.
2013 has comfortably been Tillakaratne Dilshan's best year by average (67.20), but his worst in terms of strike rate since 2005 - before he began opening the innings.
Teams:
Pakistan (probable): 1 Ahmed Shehzad, 2 Sharjeel Khan, 3 Mohammad Hafeez, 4 Sohaib Maqsood, 5 Misbah ul Haq (capt), 6 Umar Akmal, 7 Shahid Afridi, 8 Bilawal Bhatti/Anwar Ali, 9 Sohail Tanvir, 10. Saeed Ajmal, 11. Junaid Khan
Sri Lanka (probable): 1 Tillakaratne Dilshan, 2 Kusal Perera 3 Kumar Sangakkara (wk), 4 Dinesh Chandimal, 5. Angelo Mathews (capt), 6. Lahiru Thirimanne, 7. Thisara Perera 8. Seekuge Prasanna/Ajantha Mendis, 9 Nuwan Kulasekara, 10. Sachithra Senanayake, 11. Lasith Malinga