Sri Lanka reached 127-3 from 43 overs on Tuesday to draw the second Test against England and avoid a repeat of last week's humiliating defeat.

Sri Lanka reached 127-3 from 43 overs on Tuesday to draw the second Test against England and avoid a repeat of last week's humiliating defeat.

Set 343 off 58 overs when England declared its second innings on 335-7 after lunch, Sri Lanka never attempted to chase a target that was near impossible with captain Tillakaratne Dilshan able to bat only in an emergency because of a broken thumb.

Alastair Cook and Kevin Pietersen took England to a commanding 260-3 at lunch on Tuesday, giving the home side a chance of setting Sri Lanka a challenging total on the final day of the second Test.

England added 111 runs as Cook reached 87 not out, just short of an 18th Test century. Pietersen moved comfortably to 72, his highest score since a double hundred in Adelaide in December, before he was bowled by left-arm spinner Rangana Herath in the penultimate over of the session. 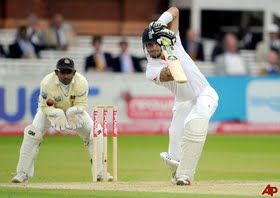 With 72 overs remaining at Lord's, England has time and wickets in hand to add to its 267-run lead and emulate its approach to the first test by putting pressure on the tourists with a declaration.

England declared with 50 overs left in Cardiff and bowled out Sri Lanka for 82 to win by an innings and 14 runs.

A similar capitulation is unlikely on a superior batting track at Lord's, although Sri Lanka captain Tillakaratne Dilshan, who scored 193 in Sri Lanka's first-innings 479, did not field Tuesday because of a fractured thumb and will bat only if he has to.

Ian Bell was the other unbeaten England batsman at lunch, with 13 from 10 balls.

Cook and Pietersen started the day reasonably briskly, adding 61 in the first hour as the hitherto economical Chanaka Welegedara conceded 12 runs from each of his second and third overs, but slowed as cloud began to obscure the bright sunshine in the hour leading to lunch.

Having managed just 2 in the first innings, Pietersen had come to the crease Monday with England on 117-2 having racked up just one three-figure score in his last 34 innings.

But he looked comfortable from the start and moved swiftly on from his overnight 15 with a series of front-foot drives against the medium pace of Welegedara and Suranga Lakmal.

The scoring slowed during Herath's overs and the spinner troubled Pietersen enough to force an inside edge onto the pad that landed safely when he was on 37.

He made it to 50 off 85 deliveries and looked like he may reach his hundred before Cook, but Herath got one to turn out of the rough outside leg and beat his defense to hit the off stump.

After scoring centuries in his first two matches against Sri Lanka five years ago, his 124-ball knock was his highest score in 12 test innings against the tourists.

Herath had earlier come close to snaring Cook too. The opener nearly played on from an inside edge off a turning delivery by Herath on 77, the ball just whistling past his off stump and the thigh of wicketkeeper Prasanna Jayawardene before rolling for four.