Pakistan speedster Shoaib Akhtar Thursday pulled out of the inaugural Sri Lanka Premier League (SLPL) citing personal reasons, and said he does not want play the game any more.

Pakistan speedster Shoaib Akhtar Thursday pulled out of the inaugural Sri Lanka Premier League (SLPL) citing personal reasons, and said he does not want play the game any more. 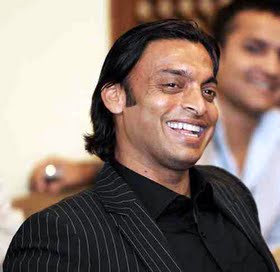 Akhtar, who retired from international cricket after Pakistan's loss to India in the World Cup semifinals, said he has had enough of the game and wants to explore the other side of life.

'My parents are old and I want to spend time with them,' he was quoted as saying by ESPNcricinfo.

'I also don't want to play or want to be on the ground any more. I am not even coming back for a job in cricket or anything, but if some youngster needs my help I will visit from time to time to help them but no more of this game.'

'I want to explore other parts of the world now. I played this game for 18 years and I don't want to spend another 18 years in that scenario any more. I am going to be involved in charity work from now on.'

The Rawalpindi Express as he was called was roped in for SLPL along with other international players such as his compatriot Shahid Afridi, Chris Gayle, Kieron Pollard, Herschelle Gibbs, Daniel Vettori and Kevin O'Brien.

The T20 event will take place between July 19 and August 4 in the island-nation.