England closed day four of the second Test against Sri Lanka at Lord's with a lead of 156 having enjoyed the better of proceedings when play finally got underway.

England closed day four of the second Test against Sri Lanka at Lord's with a lead of 156 having enjoyed the better of proceedings when play finally got underway.

More than a session's worth of time was lost before play could resume before England dismissed Sri Lanka for 479 in reply to their first innings of 486. They then closed on 149 for two in their second innings. 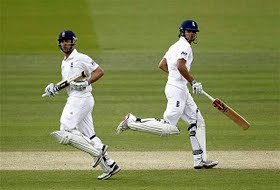 With the home side leading the three-match series 1-0, they find themselves in the driving seat and although a draw is still likely, they could choose to put Sri Lanka under some pressure on the final day.

The day ended with Alastair Cook unbeaten on 61 and Kevin Pietersen making 15 having come out on top of a short battle with left-arm spinner Rangana Herath.

Cook lost opening partner Andrew Strauss (0) early when he was trapped in front by Chanaka Welagedara but shored up the batting - as he had in the first innings - along with Jonathan Trott, who made 58 before he was clean bowled trying to work Herath into the leg-side.

It had been an area in which he had scored freely during his 75-ball stay at the crease which included nine fours. Cook registered double figures for the 12th innings in a row and looked rock-solid, hitting six fours in 134 deliveries and offering little to excite the Sri Lankan bowlers or fielders.

Pietersen played out 44 balls, his one boundary coming when he hit Herath straight down the ground with some panache.

Earlier, England's bowlers earned marks for style as they took the last seven Sri Lankan wickets for a cost of 107 runs in the day to put behind them a ropy couple of days in the field.

Mahela Jayawardene was the first man to go, adding nine to his overnight score before edging Steven Finn to Cook at slip having made 49 and he was swiftly followed back to the pavilion by Thilan Samaraweera, who drove at a wide ball from Chris Tremlett to offer Matthew Prior a simple catch.

Prior was again forced to be at his best as he had to try to deal with balls flying down the leg-side although he probably saved as many as he let through despite struggling with an injured shoulder.

Next to go was Farveez Maharoof, who played far too late at Stuart Broad and was trapped in front for two. Prasanna Jayawardene played the shot of the morning by caressing the ball down the ground for four but with England's pace bowlers getting prodigious swing and keeping disciplined, it was only a matter of time before the lower order gave way.

Jayawardene's knock of 40 in 64 balls ended when he was superbly caught by a diving Graeme Swann in the slips to give Finn, who would finish with four for 108, another wicket.

Strauss then produced another fine grab as he latched one-handed onto a chance offered by Dilhara Fernando (5) while Welagedara was caught by Broad for six, both man falling to Swann.

Swann had already ended an enterprising innings from Herath, who smacked the ball into the stands as he was losing his balance on his way to 26 in 33 balls before he was stumped.

Play was extended until 7.30 local time in a bid to make up significant swathes of time lost on the third day, which before the rain, was lit up by a record score for a Sri Lankan at Lord's of 193 by Tillakaratne Dilshan.