The debate over who is the better batsman between Steve Smith and Virat Kohli continues to divide opinion. Smith, the former Aussie skipper, had a sensational run in England

The debate over who is the better batsman between Steve Smith and Virat Kohli continues to divide opinion. Smith, the former Aussie skipper, had a sensational run in England in Ashes 2019, with 774 runs from seven innings.

Despite missing out on three innings following a blow to the head at Lord’s delivered by Jofra, which led to concussions, Smith ended up as the series’ leading run-scorer, with three hundred including a double century, and three fifties. It was only in the last innings of the series that he failed to cross the half-century mark.

Thanks to his stupendous efforts, Smith further distanced himself from Kohli in the race of number one Test batsman in the official ICC rankings. However, South Africa legend Jonty Rhodes still picked the Indian skipper over Smith, stating that the latter’s technique did not make him very pleasing to watch. 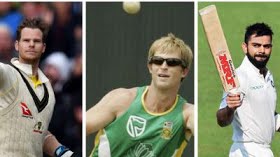 Rhodes, the best fielder of his era, is known for his refreshingly candid views and commented that Smith’s centuries are the ‘ugliest hundreds’ he has ever seen.

"I enjoy watching Virat Kohli. Steve Smith, with that action and technique, makes the ugliest hundreds I have ever seen but the man just keeps scoring runs," Jonty Rhodes was quoted as saying by The New Indian Express.

"Someone who likes to watch cricket would want to say 'Wow! What an amazing shot' as opposed to 'Oh! How on earth can he hit that?' So Virat Kohli right now." Rhodes further added.

With his tally of 774 runs in Ashes 2019, Smith surpassed his personal best of 769 runs against India during the 2014-15 Border-Gavaskar series. However, he just fell short of the overall record held by Vivian Richards, who amassed 829 in four Tests for West Indies in England in 1976.

Earlier, former Indian captain refused to join the Smith vs Kohli debate stating that while Kohli is the best, Smith’s record speaks for itself. “These are questions not to be answered. How does it matter? It’s about performance. Virat is the best in the world at the moment. So that’s what makes us happy,” Ganguly told reporters on the sidelines of an event in Kolkata.

For the record, Smith has 26 hundred from 68 Test matches and Kohli 25 from 79. Seems like this debate will not end too soon.