Pakistan laboured to a 3-wicket win with 8 balls to spare despite chasing a modest target of 235 against an average South African bowling attack. The Durban pitch was slow and there was hardly any lateral movement for the quicks.

Pakistan laboured to a 3-wicket win with 8 balls to spare despite chasing a modest target of 235 against an average South African bowling attack. The Durban pitch was slow and there was hardly any lateral movement for the quicks. Yet Pakistan made heavy weather of the target with opener Imran Farhat consuming plenty of deliveries and just ticking the balls around at his own pace. Fortunately for Farhat who scored an unimpressive 93 from 144 balls (with 8 fours and a six), Skipper Misbah-ul-Haq took care of reviving the otherwise dull run rate of the Pakistanis.

Misbah-ul-Haq, who got the Man of the Match, scored a well paced 80 from 93 balls with 7 fours and 2 sixes. The Pakistani Captain cleverly took on the South African slower bowlers to clobber them for boundaries to bring down the asking rate. Pakistan had a poor start, losing three wickets for 33 in 11 overs. The first wicket fell in a controversial manner with Mohammad Hafeez given out for ‘Obstructing the Field’. Hafeez had intentionally come in the way of a throw at the non-striker’s end and was given out according to the modified Law no.37. 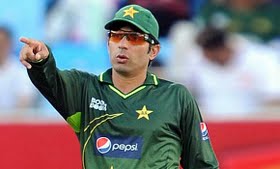 Kamran Akmal was caught low at point by Miller in the 6th over and Younis Khan dragged his steer onto the stumps off Kleinveldt. Pakistan were going nowhere when Skipper Misbah joined Imran Farhat to pile up a big partnership of 153 runs. Just when victory was granted, Pakistan lost the wickets of Misbah and Afridi in succession to feel the heat. Shoaib Malik showed his experience to steer the visitors home with an unbeaten 19. Imran Farhat finally got some big hits coming in the last phase of his innings before he was superbly caught by a backward running Farhaan Behardein who had taken a much tougher catch at mid wicket prior to this to end Misbah’s stay.

Pakistan got to the target of 235 in the 49th over having lost 7 wickets. Dale Steyn pegged them back with tight figures of 10-3-26-1. The backup bowling from the Proteas was not up to the mark though and allowed Pakistan to level the 5-mach series 2-2.

South Africa Innings: South Africa recovered from a terrible position of 38 for 4 to post a decent 234 for 9 on the board in their 4th ODI at Kingsmead, Durban. Pakistan who need to win this match to level the 5-match series 2-2 couldn’t have asked for a better start with Mohammad Irfan giving them the wickets of Hashim Amla and Colin Ingram in the first two balls of the match.

The hosts batting first after winning the toss were 0 for 2 and then 38 for 4 when Junaid Khan got the wickets of Graeme Smith and Farhaan Behardien in the 10th over. Pakistan struggled to finish off the job after this as Skipper AB de Villiers played a superb knock of 75 from 108 balls with 5 fours to bail his team out of trouble. David Miller provided him with good support with his 67 from 77 balls with 7 fours.

Towards the end of the innings, Robin Peterson played a crucial knock of 25* from 35 balls to give respectability to the Proteas. For Pakistan, Mohammad Irfan, Junaid Khan and Saeed Ajmal taking three wickets each.