England's second innings got off to a disastrous start Monday when captain Andrew Strauss fell without scoring before his team made it to 18-1 at tea on day four of the second Test against Sri Lanka.

England's second innings got off to a disastrous start Monday when captain Andrew Strauss fell without scoring before his team made it to 18-1 at tea on day four of the second Test against Sri Lanka.

After rain washed out the whole of the morning session at Lord's, England took Sri Lanka's last seven wickets for 107 runs to bowl the tourists out for 479 and take a 7-run first-innings lead. 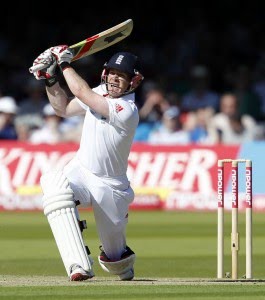 But Strauss's poor form continued when he fell second ball, lbw to Chanaka Welegedara for 0. Strauss now averages just 8 from three innings in this series.

Alastair Cook, the scorer of a first-innings 96, was unbeaten on 11. Jonathan Trott was 5 not out.

The match looks to be headed for a draw but if England's second innings resembles Sri Lanka's in the first Test, the tourists could still grab the win they need to have a chance of clinching the series.

The Cardiff Test looked certain to end in a draw last week but Sri Lanka collapsed to 85 all out in less than 25 overs and lost by an innings and 14 runs.

Sri Lanka's batsmen had resumed on a healthy 372-3 but were bowled out following an improved performance by Chris Tremlett, Steven Finn and Stuart Broad.

Finn and Tremlett found a more accurate off-stump line and quickly got rid of overnight batsmen Mahela Jayawardene (49) and Thilan Samaraweera. Broad had Farveez Maharoof trapped lbw as three key wickets fell in 38 balls for the addition of 15 runs.

Prasanna Jayawardene and Rangana Herath added 57 for the seventh wicket as the bowlers' discipline wavered but Finn finished with 4-108, to move to 50 wickets from his first 12 Tests.

Herath dispatched anything pitched up to him by the increasingly frustrated pace bowlers and took on fellow spinner Graeme Swann, who eventually had his opponent stumped for 26 with his first real turning delivery of the day.

Herath and Prasanna Jayawardene's 73-ball stand held up the home side, but it was all over once Swann got rid of Herath and Finn had Jayawardene caught low by Swann at slip for 40.

Finn struck Suranga Lakmal full on the helmet two balls later to shake the No. 10 batsman and Dilhara Fernando went soon after for 5, falling to Andrew Strauss' left-handed catch at slip off the bowling of Swann. Swann then tempted last man Chanaka Welegedara into giving Broad an easy catch for 6 as Sri Lanka's last four wickets fell for 13.

England bowling coach David Saker spoke Sunday of technical tweaks needed to help his players find and stay on the right line, and Tremlett and Finn obliged from the start on Monday.

Tremlett repeatedly hit just outside off stump and seamed it away from the right-hander, troubling Samaraweera in particular. All Samaraweera could do was to wait for loose balls onto leg, which became more frequent as the session progressed.

Mahele Jayawardene added nine to his overnight 40 before he edged Finn to slip catcher Alastair Cook, who had dropped Tharanga Paranavitana on Saturday when the opener was on 13. Paranavitana went on to make 65 in an opening stand of 207 with Tillakaratne Dilshan.

Wicketkeeper Matthew Prior, who scored 126 across Friday and Saturday before spending two rain-interrupted days fielding a frustrating total of 48 byes and leg byes, caught Samaraweera off Tremlett for 9 next over to make it 394-5.

It was 409-6 when Broad struck with the final ball of his first over, cutting the ball back in to strike Maharoof on the pad and dismiss him for 2, but Herath and Prasanna Jayawardene counterattacked entertainingly to keep their side in the hunt to reach England's 486.

The home side's frustration was compounded when it lost one of its appeals from an odd incident in the 122nd over.

Swann asked to review a not out lbw decision by Billy Doctrove after the umpire had signaled leg byes, but the decision stood because the hotspot showed the ball had glanced Rangana Herath's bat.

Doctrove neglected to change the leg byes to runs for Herath, leaving third umpire Aleem Dar to do it.