Suresh Raina smashed 73 off 50 balls as Chennai Super Kings beat the Royal Challengers Bangalore by six wickets in the first qualifier at Mumbai on Tuesday to book their place in the finals of IPL-4.

Suresh Raina smashed 73 off 50 balls as Chennai Super Kings beat the Royal Challengers Bangalore by six wickets in the first qualifier at Mumbai on Tuesday to book their place in the finals of IPL-4.

Earlier, Chennai Super Kings lost their 4th wicket when MS Dhoni was sent back by Zaheer Khan as the Royal Challengers Bangalore gained the upper hand.

CSK skipper MS Dhoni and Suresh Raina went on a rampage as the defending champions aimed to overhaul Bangalore's score of 175.

Chennai recovered through Suresh Raina and Badrinath as they chased 176 for victory.

The Super Kings lost both their openers Mike Hussey and Murali Vijay.

Virat Kohli struck a superb unbeaten 70 in only 44 deliveries to lift the Royal Challengers to an imposing total of 175 for 4. 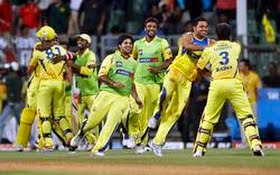 made light of a rare failure by Chris Gayle to set a stiff target for the CSK who need to score at 8.8 runs per over for victory.

Apart from Kohli, opener Mayank Agarwal made 34 in 33 balls with five fours and Luke Pomersbach made a quick-fire 29 in only 18 balls to give the innings the much-needed impetus when it was needed.

For the Super Kings, left-arm pacer Doug Bollinger emerged as the pick of the bowlers with one for 20 while off-spinner Ravichandran Ashwin, who dismissed Gayle cheaply in his first spell, finished with one for 33.

Dwayne Bravo and Albie Morkel were off-target with the latter conceding 40 runs in his four wicketless overs while Shadab Jakati picked up one for 37.

It was surprising to find that Ashwin who had normally opened the bowling wasn't brought in early as Dhoni opted for seamers from both ends.

Though Albie Morkel went for some runs when Mayank Agarwal thumped him for a few boundaries, Doug Bollinger bowled splendidly, not allowing danger man Gayle the chance to drive.

Bollinger dug the ball short and even rattled Gayle with a sharp bouncer. Gayle who has attacked from the onset didn't get a chance to free his arm.

At the other end, Agarwal who hit the first ball of the match, a juicy delivery pitched on his pads to the fine leg fence, struck two more fours off successive deliveries in Morkel's second over which forced Dhoni to get the South African all-rounder out of attack.

Ashwin, brought on to bowl the fourth over when Royal Challengers were 24 without loss, was hoisted over the mid- wicket fence when he bowled short by Gayle but had his revenge off the very next ball when he trapped the left-handed leg before as he went for a sweep.

Agarwal and Kohli came together to take the score past the 50-run mark in the seventh over after the RCB total was 42 for one at the end of the Powerplay.

With the dip in scoring rate, Agarwal tried to give the charge to Dwayne Bravo and was caught at long-on by Bollinger.

At the end of the half way stage of the innings, RCB were 75 for 2 with Kohli and AB de Villiers at the crease.

Jakati was carted over mid wicket for a maximum by de Villiers but the left-arm slow bowler got his revenge soon after by having the South African holed out at long on by Murali Vijay for 11.

With the run-rate flagging, left-handed Pomersbach was sent in ahead of Mohammed Kaif and the Australian heralded his arrival to the crease by lofting Jakati over long off for a six to raise the team's hundred in the 14th over.

The next over from Bravo was very expensive for the Super Kings with Pomersbach hitting the West Indian for two fours and a flat six over mid wicket. A total of 17 runs came off the bowler's third over to leave Royal Challengers at 122 for three with the last five overs remaining.

Kohli carted Ashwin's last ball of a new spell over wide long on for his first six after the off-spinner had kept Pomersbach quiet in the earlier part of his third over.

Pomersbach was fortunate as his Australian compatriot Bollinger had one hand to a very difficult return catch in the next over before the ball popped out to reprieve the batsman.

But the escape was short-lived as the batsman was clean bowled going for a heave to leg by Bollinger two balls later.

Pomersbach struck two sixes and as many fours in his 18-ball knock and also added 48 runs for the fourth wicket with Kohli.

Ashwin could not latch on to a hard return catch from Kohli off the first ball off his last over and conceded a boundary. Saurabh Tiwary hit him for another four before the bowler was hit on the left side of the forehead while trying for a return catch off the last ball of his spell.

Kohli then went on the rampage in the penultimate over by clobbering Morkel, back into the attack after a poor first spell, for two huge sixes and a four. The over yielded 19 runs and in the process Kohli also reached his 50 in 36 balls.

The last over from Bollinger yielded eight runs, so the Royal Challengers put on 53 runs in the last five overs while losing the wicket of Pomersbach. They added 70 runs in the last six overs.