Pune Warriors pull out of IPL

Pune Warriors who haven’t been in good terms with the BCCI have finally decided to pull off from the Indian Premier League. The Pune Warriors had a disastrous season finishing second last in IPL 6.

Pune Warriors who haven’t been in good terms with the BCCI have finally decided to pull off from the Indian Premier League. The Pune Warriors had a disastrous season finishing second last in IPL 6. The franchisee has been in the IPL for just the three years and it now joins the Kochi Tuskers Kerala and the Deccan Chargers as the defunct IPL teams.

Sahara Group which owns the Pune Warriors has released an official statement on their decision to withdraw from the IPL as below:

BCCI AS A SPORTS BODY SHOULD HAVE SPORTSMANSHIP SPIRIT 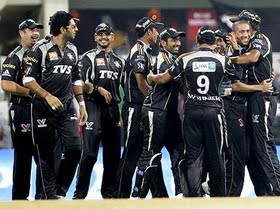 In 2010 Sahara had bid 1700 crs. for IPL franchise on the basis of revenue calculation on 94 matches. It was tricky on part of BCCI to put the number in Media as 94 matches for getting bigger amount. But we got 64 matches only. We and Kochi Team immediately protested and request BCCI to reduce the bid price proportionately for viable IPL proposition. Nothing was heard. We waited with confidence that such a sports body should have sportsmanship spirit. We continuously requested BCCI for Arbitration from June 2011. But BCCI is only concerned about money and not about the genuine interests of the franchisee Thus, we could not penetrate BCCI's deaf ears and we announced our withdrawal in February 2012.

The BCCI approached us for a solution and requested us to not withdraw. After a series of discussions with the topmost BCCI officials including the BCCI President at Mumbai, a Joint Statement was issued by Sahara & BCCI in Feb 2012. The Joint Statement, amongst many other things, specifically mentioned the agreement to start Arbitration proceedings through immediate appointment of an Arbitrator.

Following up on the Joint Statement, Sahara suggested the name of a Retired Hon'ble Chief Justice of India on the 5th March 2012 to be appointed as the Arbitrator. There was no response from BCCI for four months and after repeated prodding, finally on the 9th of July Sahara's advocates received a letter from BCCI rejecting the name proposed by Sahara without mentioning any reason and also without suggesting any alternatives.

After that, despite our repeated efforts to have the Arbitration initiated, we sent other suggestion of names which too were turned down and instead meaningless communication was created to stall finalization.

In the meanwhile, Sahara kept on paying the full Franchise Fee of Rs 170.20 crore annually, without prejudice to its rights and contentions, in the hope that this will be resolved soon. But unfortunately, it was not done.

Fed up with this stalemate our Hon'ble Chairman Saharasri ji had written to the BCCI president that the arbitration for downward revision of the fees has not progressed in 3 years time, hence, has requested for a proper meeting to personally discuss the way forward and explicitly said that if a downward revision is not possible then we would want to surrender the franchisee. This went a deaf ear.

After that a few days back in Delhi our Hon'ble Chairman Saharasri ji had again, this time requested in person to Hon'ble Shri Rajeev Shukla ji, that if BCCI cannot accept Arbitration, we then want to amicably exit IPL. Our Chairman in clear words was committed again by Hon'ble Shri Rajeev Shukla ji that BCCI shall comeback and till then Bank guarantee will not be touched, not be revoked since the expiry date of bank guarantee was 2nd May 2013.

But again we waited and no reply came.

Despite our legal person's advise of exiting IPL at the start of the season itself, we still in utter sportsmanship spirit went ahead with the season, so that the IPL season does not get affected, safeguarding the larger interest of Cricket in India and the players. Had we followed the legal advise of withdrawing at the start of the IPL season, this would have resulted in putting tremendous pressure on BCCI for resolving the issue whereas BCCI has shown its un-sportsmanship and no consideration towards the sports which we have been supporting for more than a decade.

But our legal department was right. Because our last match was on 19th May and on 20th May, BCCI representative was there in the Bank to revoke the Bank guarantee. We still tried to contact for amicable settlement, but could not get anybody on phone in time. But our bank people informed that even at 8 in the evening the BCCI representative was still present in the Bank and threatened the bank that if money is not paid today to BCCI, tomorrow they shall enter court to black list Bank. One should ask BCCI why they did not approach bank for revocation of our bank guarantee from 2nd May to 19th May. That's why these were so, so harsh on 20th May without talking to us and even then they had every right to invoke Bank Guarantee. What is this character of sports body to a company who does so much for sports. -

It is important to state that Sahara has never, ever defaulted in any of its due payment in last 13 years of team sponsorship etc. We put on record that there is not a single rupee outstanding towards the sponsorship of Indian Cricket Team and BCCI is even secured by a bank guarantee against the sponsorship. Rather during ICC Champions Trophy 2002, Sahara had paid full sponsorship amount even without Sahara branding on the player's Jersey. It is futile to talk all these to such a strong un-sportsman spirit sports body which lacks true commitment towards Sports and cricket.

Considering all the disgusted fact mentioned above now we would not keep the IPL franchisee even if the entire franchisee fee is waved off. It is firm and final decision of Sahara to withdraw from IPL.

We now request BCCI to not to approach us this time for any discussion as they have done in February 2012.

There is a very strong urge in us to withdraw from the Indian Cricket Team Sponsorship from today only. But, interest of the players will suffer if we do so. We share an excellent relationship with the players and will not want such dedicated and good human beings who serve the country so committed to get harmed financially due to unsporting attitude of BCCI. So we have given time to BCCI to get the new sponsorship in place from January 2014, as we will continue the national team's sponsorship only up to December 2013 that's the expiry date of the present agreement.

Sahara assures its players and stakeholders that their Fees and other rightfully due payments will be protected and under no circumstances will they suffer. Sahara also assures its sponsors and other supporters who have shown faith in us that their obligations have and will be fulfilled and there will be no compromise on their status or rights. Besides, we are in the process of building a Sports Foundation, which will operate on a hub and spoke model. Whereby there will be a Central National Sports Academy with numerous regional sports academies affiliated to it.

These affiliated regional sports academies will be based in the areas where there is a proven natural pool of skill set and talent for a particular sport, like an academy in Bhiwani will specifically focus on boxing, the academy based in Ranchi will focus on Archery and Hockey while the one in Hyderabad will focus on Badminton and Tennis. Under this Foundation more than 200 talented upcoming prospective sportsmen will be supported and trained in the academies. Sahara will reach out to all the former international sports athletes who are running academies across India and support them.