Australia suffered their second dramatic collapse in the limited overs series against England, to lose the second ODI by 24 runs, allowing the hosts to level the three-match series 1-1. 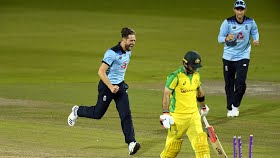 Sunday’s collapse was triggered by Chris Woakes, who trapped Labuschagne lbw. In the space of four overs, the Aussies slipped from 144 for 2 to 147 for 6. Woakes had Finch and Glenn Maxwell clean bowled while Jofra Archer undid Mitchell Marsh at the other end as Australia completely lost their way against the world champions. Alex Carey fought hard with 36, but was the last man out to Adil Rashid with the target well beyond Australia’s reach.

While Woakes was the middle-overs star, it was Archer who kept England in the chase early on getting rid of danger-men David Warner and Marcus Stoinis with pacy deliveries. The well-directed bouncer to Stoinis was unplayable as he could only fend it off awkwardly straight up in the air.

Earlier, England themselves were in massive trouble at 149-8 before a 76-run stand for the ninth wicket between Tom Curran (37) and Adil Rashid (36) gave their total some respectability. 53 runs came off the last four overs as England took the momentum at the halfway stage. They were extremely sluggish at the start, with Jonny Bairstow falling without scoring and Joe Root labouring his way to 39 in 73 balls.

In the chase, Finch and Labuschagne seemed to have weathered the early storm. However, they collapsed inexplicably. After Woakes and Archer, Sam Curran joined the fun by sending back Pat Cummins and Mitchell Starc off consecutive balls before adding the scalp of Adam Zampa.

“That’s as well as we’ve bowled for a while. We took advantage of conditions, the ball reverse swung a little bit, went up and down. Our group of four seamers were outstanding,” England captain Eoin Morgan said.

On the other hand, Aussie skipper Finch admitted, “England squeezed us, they bowled a really good length. It was hard to hit boundaries but I’m still very disappointed.”