Every time one thinks that the year cannot get any better for Shikhar Dhawan, he comes up with something even more sensational. In the virtual semi-final against South Africa A, the fearless left-hander came up with his best knock in list A cricket, and the second best ever in the form of the game to take India A to the final of the tournament.

Every time one thinks that the year cannot get any better for Shikhar Dhawan, he comes up with something even more sensational. In the virtual semi-final against South Africa A, the fearless left-hander came up with his best knock in list A cricket, and the second best ever in the form of the game to take India A to the final of the tournament. Dhawan’s sensational knock was instrumental in India A smashing an unbelievable 433 for 3 in 50 overs. South Africa replied in an equally brilliant manner, but Dhawan’s massive innings ensured that India had enough cushion in the end.

Dhawan’s knock was incredible in every sense. He proved what the side missed in the last game against Australia A, where they went down rather easily chasing a mammoth score. Here, India A batted first against the Proteas at Pretoria, and knowing very well that their bowling was weak, they needed a very big score to defend. Right from the start, Dhawan was in command. India A were helped by the fact that Dhawan got very good support from the rest of the batsmen as well. 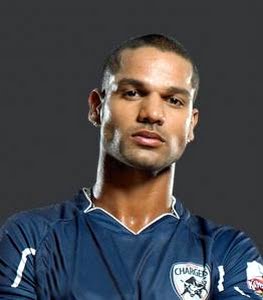 Dhawan and Murali Vijay, who looked good in the last game as well, added 91 for the opening wicket inside 12 overs. Like in the previous match, Vijay was dismissed after getting a start, this time for 40 off 37 balls, an innings which saw him hit seven fours. Dhawan was then joined by skipper Cheteshwar Pujara, who needed to play a captain’s knock to make a significant impact on the game. For the earlier part of their partnership, both Dhawan and Pujara exercised caution. It was understandable since their batting had often collapsed in the past after a good start. This time there were adamant on not giving away the advantage.

Dhawan however ensured that India A picked up the run-rate. He raced to his century off 86 balls. Soon, he smashed a couple off sixes, and never looked back from that point, as the boundaries kept coming at regular intervals. Before South Africa A could realise, Dhawan was racing to his double hundred. In fact, he got to his second hundred in double quick time, needing a mere 46 balls to jump from 100 to 200. By the time he was eventually dismissed, he had smashed 248 in 150 balls with the aid of 30 fours and seven sixes. Pujara helped himself to an unbeaten 109 off 97 deliveries as India ended with a humungous 433 for 3.

South Africa A’s reply was equally astonishing. Their opening pair Reeza Hendricks and Rilee Rossouw blasted 121 inside 13 overs to set the hosts on their way. Hendricks slammed 106 off 78 balls while Vaughn van Jaarsveld blasted 108 in 91 balls to keep South Africa A’s hopes alive. Skipper Justin Ontong and Roelof van der Merwe also played quick cameos. But the pressure eventually got to them, and they were dismissed for an unbelievable score of 394. It is a number most teams would dream of. However, in this case Dhawan’s knock was extra special, and made the difference.