Bhuvneshwar reveals what Dhoni told him during crucial partnership

Bhuvneshwar Kumar, who starred in India’s come from behind win over Sri Lanka in the second ODI has revealed that MS Dhoni

Bhuvneshwar Kumar, who starred in India’s come from behind win over Sri Lanka in the second ODI has revealed that MS Dhoni advised him to bat like in does in Tests during the crunch situation.

Bhuvneshwar made an unbeaten 53 and featured in a 100-run partnership with Dhoni for the eight-wicket as India scampered home by three wickets.

"When I went in to bat, MS told me to play my natural game like I play in Test cricket and don't take any pressure as we had a lot of overs at that time. We knew if we played them out we would chase easily," Bhuvneshwar said so in the post-match conference as per a PTI report 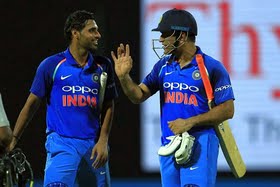 "I knew there is nothing to lose in this situation as we were already seven down. I was just thinking that I can play and that I have to support MS as much as I can. And that's what I tried to do," he said.

Lankan off-spinner Akila Dananjaya scalped 6 for 54, as India collapsed after the openers Rohit Sharma and Shikhar Dhawan featured in a century stand.

"It was a little surprising because we had a very good opening partnership. Then 3-4 wickets fell quickly so it was a bit of a panic situation for us. There was no message as such from the dressing room or MS Dhoni.

"The only thing was they wanted me to play as long as possible. I also wanted to do the same thing because that was the only chance to win if I could play all those 47 overs. That was my plan," Bhuvneshwar added.

On how he tackled Dananjaya, he explained, "I had a plan against him. He is an off-spinner but he was also bowling leg spinners and googlies so it was a surprise for us. I just wanted to play him for the wrong one or the googlies, which he was bringing in to me. And whatever was going away from me I wasn't really worried about that.

"Whatever wickets he took that was on the googly, the incoming delivery, so my plan was to counter his incoming deliveries. Initially it was a bit difficult to read him from the hand but later on when I played him for 10-15 balls I could read his variations," he added.