For Team India, it was as easy as it gets

Although the series against West Indies was primarily about Sachin Tendulkar’s farewell, there were still two cricket matches to be won.

Although the series against West Indies was primarily about Sachin Tendulkar’s farewell, there were still two cricket matches to be won. And, Team India did exceedingly well to keep all their emotions aside to clinch two comprehensive victories. India were favourites at the start of the series, and any result less than 2-0 would have been a shocker. In that sense, the victory wasn’t an exceptional achievement, but the fact that they won both the Tests by an innings margin is a laudable achievement. Both with bat and ball, India outclassed the West Indies. 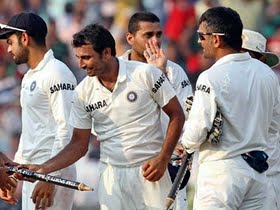 There were significant positives for India from the series. Amongst the biggest of them was undoubtedly the performance of Mohammed Shami at his home ground in Eden Gardens. The bowler from Bengal not only generated pace, but also reverse swung the ball to great effect during his 9-wicket match haul at Kolkata. Over the years, India have struggled to find a bowler, who can run through opponents using pace and swing. Shami did both. Seven of his victims in the series were clean bowled, most of them having their stumps in tatters after being beaten for pace.

Shami has had a great start to his Test career, but we will only know in the time to come whether he is one for the future. Shami will have to stay fit, something which Indian fast bowlers have struggled to do for years now, and maintain his form and rhythm. Although he performed incredibly well against the West Indies, the performance came against an extremely weak side. He can be better judged only after we see him bowl in South Africa next month. The Proteas are used to his kind of bowling, and it would be intriguing to see how Shami responds to the challenge.

Spinners were always going to play a big part in the series, like they did the last time West Indies visited India around the same time in 2011. Pragyan Ojha outthought most of the West Indies batsmen en route to his ten-wicket match haul at Mumbai, one of his favourite hunting grounds. The Windies batsmen had no idea how to deal with Ojha’s left- arm spin. India would like him to continue in the same vein against better opponents. Ashwin did reasonably well with the ball in both the Tests, but it was his batting that stood out. He must only ensure that he doesn’t lose grip of his bowling while batting exceedingly well.

While on the topic of batting, India’s batsmen, barring the openers, were impressive. Shikhar Dhawan and Murali Vijay got starts in both Tests, but failed to carry on. However, the middle order made up for the same. Rohit Sharma got a magnificent hundred on debut, under pressure, and went on to convert it into a big one. He got another hundred at Mumbai, after Cheteshwar Pujara had compiled one of his own. And then of course there was Sachin Tendulkar’s 74.

To sum up the series, it was as easy as it gets for India.