Under pressure after being outdone by West Indies in the first ODI at Chennai, India came up with a stunning all-round effort at Visakhapatnam to level the series 1-1.

Under pressure after being outdone by West Indies in the first ODI at Chennai, India came up with a stunning all-round effort at Visakhapatnam to level the series 1-1. Batting first, India posted a massive 387/5 courtesy hundreds from Rohit Sharma (159) and KL Rahul (102). In response, West Indies were bowled out for 280. Kuldeep Yadav (3 for 52) claimed his second ODI hat-trick while Mohammed Shami picked up 3 for 39. For West Indies, Shai Hope and Nicholas Pooran scored 78 and 75 respectively. The decider will be played in Cuttack on December 22.

West Indies captain Kieron Pollard opted to bowl first after winning the toss. However, this time Rahul and Rohit were in sizzling form as they added a massive 227 runs for the opening wicket -- India’s fourth-highest opening stand ever. Rahul fell for 102 off 104 balls, hitting eight fours and three sixes. Very next ball, skipper Virat Kohli fell for a golden duck as he mistimed a slower ball off Kieron Pollard straight up in the air. Rohit then found another stable partner in Shreyas Iyer (53 from 32), who continued his good run at number four. 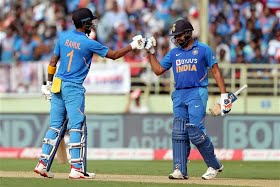 Rohit was eventually dismissed for 159 off 138 balls, edging Sheldon Cottrell (2/83) behind the wickets. Buoyed by his self confidence-gaining fifty in the previous game, Rishabh Pant came out all guns blazing, smacking 39 from 16. In the 47th over, Iyer smashed Roston Chase for 6,4,6,6,6 as a record 31 runs came in the over -- the most scored by India in an over in ODIs. Kedar Jadhav (16 not out off 10) lifted India to 387 for 5.

Chasing 388, West Indies openers Evin Lewis and Shai Hope added 61 before Lewis fell to Shardul Thakur for 30, pulling one to Iyer at square-leg. Iyer then ran out Shimron Hetmyer (4) with a brilliant throw from the boundary to the bowler's end as Ravindra Jadeja took off the bails swiftly. Jadeja soon beat Chase (4) with turn and drift, and clean bowled him. However, Pooran and Hope counter-attacked and added 106 for the 4th wicket in 80 balls. The threatening partnership ended as Shami had Pooran caught by Kuldeep at the fine-leg boundary. Very next ball, Pollard, who had earlier dismissed his opposite number first ball, was also caught behind while facing his first delivery.

Kuldeep then picked up his 2nd ODI hat-trick, sending back Hope, Jason Holder (11) and Alzarri Joseph (0) off the 4th, 5th and 6th balls of the 33 over, as India emerged triumphant by 107 runs.