Defending IPL Champions Kolkata Knight Riders eased to a six-wicket win over Delhi Daredevils in the opening match of the sixth edition of the Indian Premier League. In front of a huge crowd at the Eden Gardens, the hosts needing only 129 for a win got to the target with 8 balls to spare. Skipper Gautam Gambhir led the run chase with a well paced 42 from 29 balls with 5 fours and a six on a pitch that wasn’t easy for strokeplay. Kallis and Manoj Tiwary chipped in with 23 each to help KKR get near the target without any trouble. 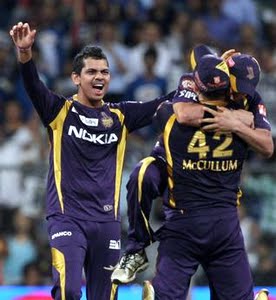 Daredevils bowled out for 128: Kolkata Knight Riders, the defending IPL Champions need just 129 runs from 20 overs to win their opening contest against Delhi Daredevils at the Eden Gardens. Delhi Daredevils struggled to get going on a pitch that was holding up the ball on its surface. Trouble started from the first ball of the match for the Daredevils when Unmukt Chand's off stump was castled by Brett Lee. Skipper Mahela Jayawardene was the only man fighting it out for the visitors scoring 66 from 52 balls. Sunil Narine weaved his magic taking 4 for 13 in 4 overs for KKR.

Toss and Teams: Hosts Kolkata Knight Riders have won the toss and asked Delhi Daredevils to bat first in the IPL 6 opener at the Eden Gardens. KKR’s four overseas players are Kallis, Morgan, Lee and Narine. Delhi Daredevils’s four overseas players are the Skipper Mahela Jayawardene, Warner, Russell and Botha. The big blow for Delhi is that Virender Sehwag is out of this match with an injury.