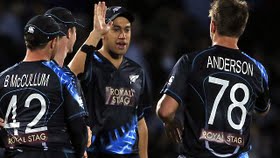 Hamish Rutherford is Man of the Match and his captain says about him: Hamish was outstanding the way he stuck the ball, he settled the entire line up and showed you could get value for your shots.

Scene of England's dominant Champions Trophy semi-final win, a different surface is likely to be used for the T20 but bounce and turn should still figure. The forecast is for a warm evening with some cloud cover

1.England have won seven out of nine T20s against New Zealand. The only previous T20 international played between them in England was a nine-wicket home victory at Old Trafford in 2008.

2.New Zealand have the top two T20 batsmen in the world - Martin Guptill and Brendon McCullum - according to the current rankings.

3.Since making a half-century against Worcestershire at the start of May, Alex Hales has score 78 runs in 13 innings, with 11 single-figure scores.