India captain Virat Kohli has dropped a hint that Hardik Pandya may make his Test debut against Sri Lanka on Wednesday at Galle.

India captain Virat Kohli has dropped a hint that Hardik Pandya may make his Test debut against Sri Lanka on Wednesday at Galle.

India had lost to Sri Lanka at the same venue a couple of years back. Reflecting on the same, Kohli said in a PTI report, "Last time, we felt we probably were a batsman short and the fifth bowler did not do much in the game. We have those options again, but we have great balance in the side as well. We have got a guy like Hardik Pandya, who is a wicket-taking bowler. Every game that he plays, on any surface, he has a knack of picking wickets. He has a great chance of playing as well.” 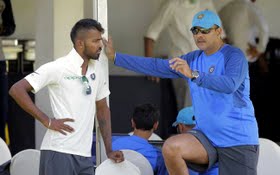 Kohli recalled Stuart Binny's all-round skills came in handy in the next two Tests. "In the next two Tests on that 2015 tour, we played an all-rounder (Binny) and that made all the difference. The extra batsmen would give us more solidity. We have taken learning from that and we will surely apply those straightaway in the series instead of getting a feel of how things will go. You need to have your best strike bowlers in order to pick up 20 wickets," Kohli added.

Speaking about the Galle surface, the Indian skipper said, "There is a good grass covering and we expect it to be a good batting wicket. It was rolled yesterday and I am sure today, it would have been rolled in very nicely as well. And underneath the surface, it looks very hard. There is grass covering on it to keep the surface bound up and it should be a very good batting track.”