CWC 2015 ENG vs SL Match report: The English team have had a terrible 2015 World Cup, and going into Sunday’s clash against the Sri Lankans at Wellington they had only won one match, that too against the lower-ranked Scotland.

The English team have had a terrible 2015 World Cup, and going into Sunday’s clash against the Sri Lankans at Wellington they had only won one match, that too against the lower-ranked Scotland. Not many have given England a chance of progressing beyond the quarter-final in the competition. In fact, some even doubt whether they would make it that far in spite of the presence of weak teams in their group. To change this preconceived notion of the side, England needed to come up with a competitive performance against Sri Lanka at Wellington. Instead, they came up with yet another embarrassingly insipid effort.

England’s bowling in the match was most disappointing. True, the pitch was a very good one to bat on. Still, England’s bowlers could have done much better. After all, they were defending a 300 plus score. It is not 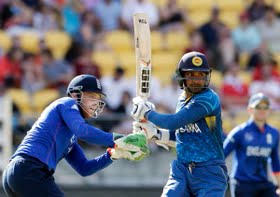 that England do not have quality bowlers. James Anderson and Stuart Broad are two of the most experienced fast bowlers around in international cricket. Yet, they looked like complete novices against the Lankan batsmen, failing to make any sort of impact at all. Disappointingly, this is not the first time that Broad and Anderson have struggled in the tournament. Except for the game against Scotland they have been poor.

In fact the whole England bowling as a whole has been below par. The fact that Anderson and Broad have struggled has only made matters worse for Steven Finn and Chris Woakes. Unlike Broad and Anderson, Finn and Woakes have been among the wickets, but they have conceded a lot of runs as well. Finn was again taken to the cleaners at Wellington. He hasn’t learnt to vary his deliveries, and his length balls have been easily put away. Even Woakes seems to have lacked any sort of a plan while bowling. It has been a complete mess in short.

If England want to take some positives out of this game, it is definitely their batting. Joe Root yet again proved why he is England’s best since Kevin Pietersen. His century was high class, but again England have a lot to worry about. Moeen Ali again failed against a top side, while Gary Ballance continued to look out of sorts at number three. Ian Bell got some runs again, but gave it away as he has so often done in the past. Skipper Eoin Morgan’s form continues to remain a worry for the team. His snail-paced innings hurt the side’s momentum.

For Sri Lanka, it was a performance that would give their campaign a much-needed push. Although their bowling was ordinary at Wellington, for the second game in a row, they lost only one wicket while slamming over 300. Lahiru Thirimanne continued his good form, but the best aspect of his innings was that this time he carried on and made his form count big time with an elegant hundred. Kumar Sangakkara also continued his rich vein of form with yet another unbeaten ton. The Lankans should be extremely pleased with their recovery following a poor start to the tournament. Now, if only they can get their bowling act together.