Former India Skipper and present TV Commentator Sourav Ganguly is strongly insisting the inclusion of left arm spinner Pragyan Ojha in the XI for the WACA Test at Perth.

Former India Skipper and present TV Commentator Sourav Ganguly is strongly insisting the inclusion of left arm spinner Pragyan Ojha in the XI for the WACA Test at Perth. Ganguly wants Pragyan Ojha to take the place of off spinner R Ashwin who has struggled to create any impression on the Australian batsmen. Ganguly on air in the Sydney Test commented that the Aussies in general have been vulnerable to quality left arm spin. He is also of the opinion that Ojha is good Test bowler. 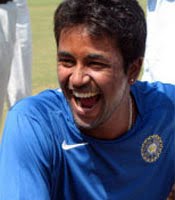 Meanwhile Sourav Ganguly has also given support to fast bowler Umesh Yadav saying that the Vidarbha boy should be spared the axe despite a poor peformance at Sydney. Ganguly thinks that Umesh Yadav had bowled well in Melbourne and should not be dropped because of one bad test.