Who can break Lara’s record of 400? The legend himself picks his top three

West Indian legend Brian Lara believes that it is not impossible for players of the current generation to break the record for the highest Test score of 400 set by him. In fact, he even named a few players who, he feels, are capable of breaking the barrier. 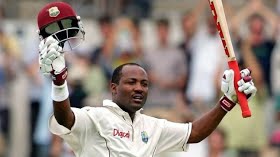 Lara feels Indian captain Virat Kohli, Aussie opener David Warner and India’s ODI vice-captain Rohit Sharma are capable of crossing 400 in Tests. While he also took the name of Steve Smith, Lara added that his batting position would make it difficult for him to score the number of runs.

"You know a player like David Warner for sure. A player like Virat Kohli, who gets in early and gets set. He is a very attacking player. Rohit Sharma on his day. So they have got quite a group of players who can do so," Lara told India Today.

"It would be difficult for Steve Smith to do it batting at No.4 for Australia. He is a great player but he doesn't dominate," the former West Indies captain said about Smith, a modern-day great. Despite the fact that India haven’t won an ICC trophy since the Champions Trophy triumph under MS Dhoni back in 2013, Lara opined that India remain among the favourites to lift the World T20 to be held in Australia later in the year.

"I think they are definitely capable of winning all tournaments that they play. I think what Virat Kohli and company and the Indian team has to appreciate the fact that everybody sort of target India. Everybody knows that some point of time one team is going to play that important match against India. If it’s a quarter-final, semi-final and final," Lara further told India Today.

India were the winners of the inaugural World T20 in South Africa in 2007, but haven’t won the title since. They lost to Sri Lanka in the final in 2014, and to West Indies in the semi-final in 2016, despite Kohli being the man of the tournament in both editions.