English skipper Eoin Morgan praised his bowlers after the hosts overcame New Zealand to earn their spot in the semi-final with an impressive win at Cardiff.

Chasing 300 plus, New Zealand were in with a good chance as 95 were added between Kane Williamson and Ross Taylor. But, Mark Wood produced a brilliant delivery to send back Williamson and Liam Plunkett claimed four wickets.

"I thought they did an outstanding job," Morgan said in the post-match press conference. "They were truly the highlight of the day. I thought the bowlers today as a collective unit were brilliant. I think given games that we've played against South Africa recently where we've turned games around - the game in Leeds where [Hashim] Amla and Faf [du Plessis] got going and we managed to take two wickets quite quickly and the Southampton game where we pulled it out of the bag out of nowhere - it breeds a bit of confidence." 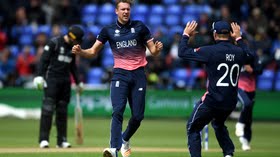 Giving praise to England bowlers, Williamson said, "Credit to the way England bowled. They got a lot out of the surface. They bowled a very good area, very consistent, and made life difficult for us with the bat. They're all big lads, and they pretty much hit that sort of maybe six-metre length and created a little of variability out of the surface and didn't give us much at all."

On Wood, who dismissed him, Williamson added, "He's a very good bowler, unique in the fact that he bowls at such good pace, off maybe ten-metre run-up, which you don't see too much around the world. He's performed very well for England over a period of time on very good surfaces."