Bangladesh got the better of India by three wickets on the (D/L method) to clinch their maiden U19 World Cup title. A spirited bowling effort restricted India to 177 after the defending

Bangladesh got the better of India by three wickets on the (D/L method) to clinch their maiden U19 World Cup title. A spirited bowling effort restricted India to 177 after the defending champions batted first. Rain then reduced Bangladesh's target to 170. Despite India's spirited fightback, Bangladesh held on to create history.

Opener Parvez Hossain Emon and skipper Akbar Ali featured in the crucial seventh-wicket stand that sealed the deal for Bangladesh. Emon top-scored for Bangladesh with 47 from 79 while skipper captain Ali made an unbeaten 43 from 77 balls. Before the target was revised to 170, Bangladesh were 163 for 7 in 41 overs when rain stopped play.

Bangladesh got off to a confident start in the chase as Emon and Tanzid Hasan added 50 runs for the opening wicket. Leg-spinner Ravi Bishnoi then brought India right back into the game with a brilliant spell. He dismissed Tanzid, Mahmudul Hasan, Towhid Hridoy and Shahadat Hossain as the chasing side slipped from 50 for no loss to 65 for 4. 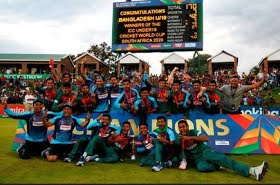 While captain Ali helps one end up for Bangladesh, pacer Sushant Mishra dismissed all-rounder Shamim Hossain and Avishek Das to reduce the batting side to 102 for 6. Emon, who had retired hurt after picking up cramps, returned to join his captain in the middle.

Emon and Ali added a crucial 41 for the seventh wicket to put Bangladesh right back on top. Yashasvi Jaiswal finally broke the stand by having Emon caught by Akash Singh at extra-cover. By then though Bangladesh had gained the upper hand as Ali took his team home.

Earlier, India's batting couldn't live up to expectations on the big day. They were bowled over for a disappointing 177 in 47.2 overs. In-form opener Jaiswal was brilliant with 88 from 121 balls. He finished the tournament with 400 runs. However, the rest of the batting couldn’t produce anything substantial.

For Bangladesh, Shoriful Islam (2/31 in 10 overs) and Tanzim Hasan Shakib (2/28 in 8.2 overs) kept the Indians on the back foot throughout. India lost 6 for 21 in a span of nine overs as Bangladesh bowlers maintained a complete stranglehold over the fancied Indians. The defending champions could never recover from the setback.